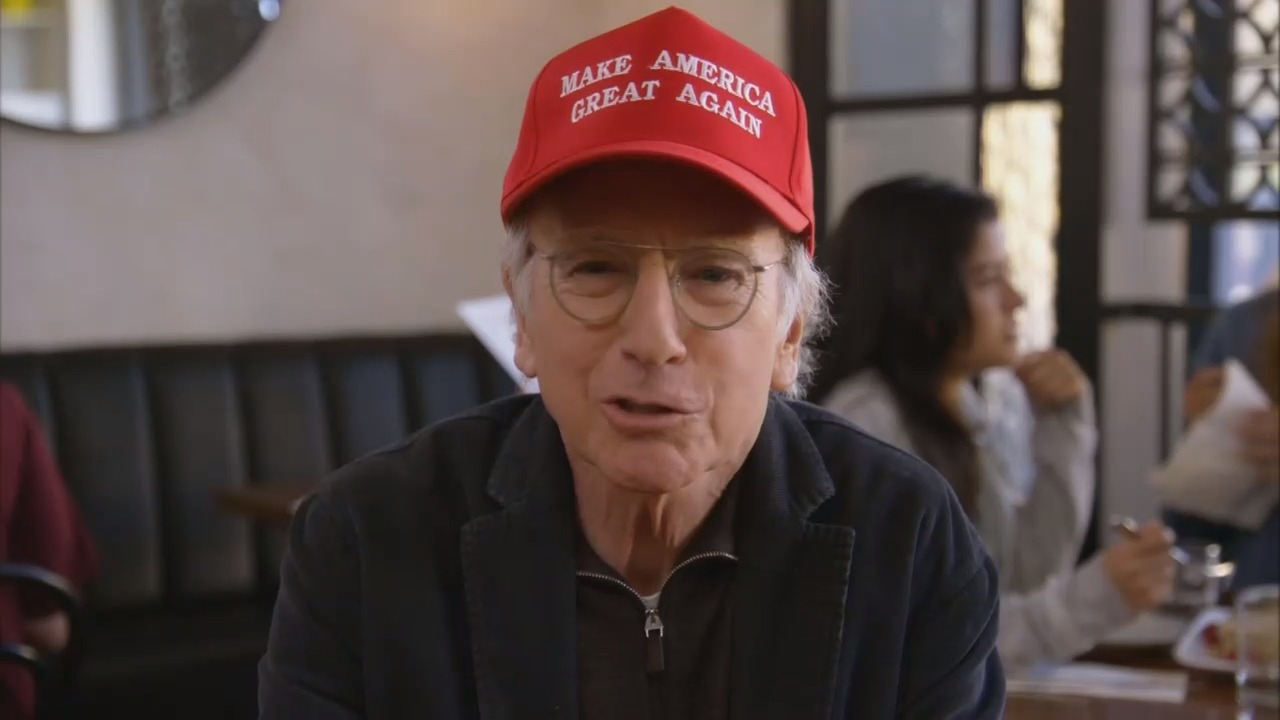 Instead of directly trolling President Trump by name, the red MAGA hat made famous by the Trump campaign was weaponized in the season premiere of HBO’s Curb Your Enthusiasm. In three scenes of the episode titled “Happy New Year” airing on January 19, a MAGA hat made an appearance and was met with scorn.

The first MAGA hat appearance was early in the episode. Larry David and his friend Leon were walking down a street and a man passed by wearing a MAGA hat. This brought about a hostile mention from Larry that MAGA hats aren’t seen in L.A.

Larry: He was putting talc under his arm, -on his balls... It was disgusting. I mean, who still uses that?

Leon: I use that shit all the time.

Larry: Can't be good for you.

Leon: Not if you're allergic to it. My Auntie Rey put some of that shit on her, and went into anaphylactic shock.

Leon: Yeah. Started Shakin' and shit. Took her to the ER. -Man, they had to pump her stomach for nothing.

Larry: Look at this guy in the MAGA hat.

Leon: You fuckin' don't. Know what I noticed? No one ever wears those hats on backwards. If mean, if you're gonna get your ass kicked, you want to see it coming.

Not only does their conversation assume that there are no Trump supporters in L.A. but they also refer to the violence that some supporters have experienced while wearing a MAGA hat.

The second scene involving a MAGA hat happens as Larry and Jeff discuss a golf game. Jeff says he won’t play with someone Larry suggests because he is a Trump supporter.

Larry: Yeah. Um... Arnie Norton asked if he could play.

Jeff: See him around town with that hat. "Make America Great Again." I don't need that crap. He just-- He makes me want to not be anywhere near him. I don't know. You can check with Carl. See if he wants to play.

This conversation gives Larry the idea to wear a MAGA hat to a lunch with a colleague. He wants to get out of having a long lunch with the man so he wears the red hat to run him off. It works. The other people in the restaurant are clearly disgusted, too. Later, Larry uses the hat to avoid having people sit next to him at a sushi bar. And, after all that, he pulls out the hat to avoid an ugly confrontation with a biker he crowded on the road while driving his car.

Larry: Good to see you. Sit. Sit down. Sit down. Boy, I'm so glad we did this. It was such a good idea. You, you were definitely right. I'm, I'm starving. I hope this place is good.

Phil: Yeah, yeah, it's great. It's big portions on the food and everything. It's really... A fantastic place.

Larry: Um... You know what else? I've been thinking... Really thinking about this Ethiopia thing.

Phil: Yeah, actually, I heard that we have some budget cuts, and Ethiopia's a little... Ex-expensive to shoot in.

Larry: Wasn't that one of the shithole countries? I can't remember if that was on the list or not.

Larry: Send, send an Uber or something.

Phil: He needs to see me because he has a little anxiety.

Man: Two seats at the sushi bar. You know what? Actually, I think we'd prefer to sit at a table, please.

Biker: Hey! What the fuck are you doing?

Biker: Motherfucker! What the fuck? What are you trying to do, man? What the fuck are you doing? You little fucker!

Biker: What the fuck?

Biker: I'm ought to rip you outta that fuckin' car! -You little shit.

Larry: Will do. Will do. Okay. Thank you.

Later Larry is talking about the hat and says, "It's really coming in handy" for avoiding people, "It's a great people repellent."

So, this is how Season 10 begins. Turning people who wear the red MAGA hat into a joke. Let’s hope the writers get some more creative ideas for dialogue as the season progresses.