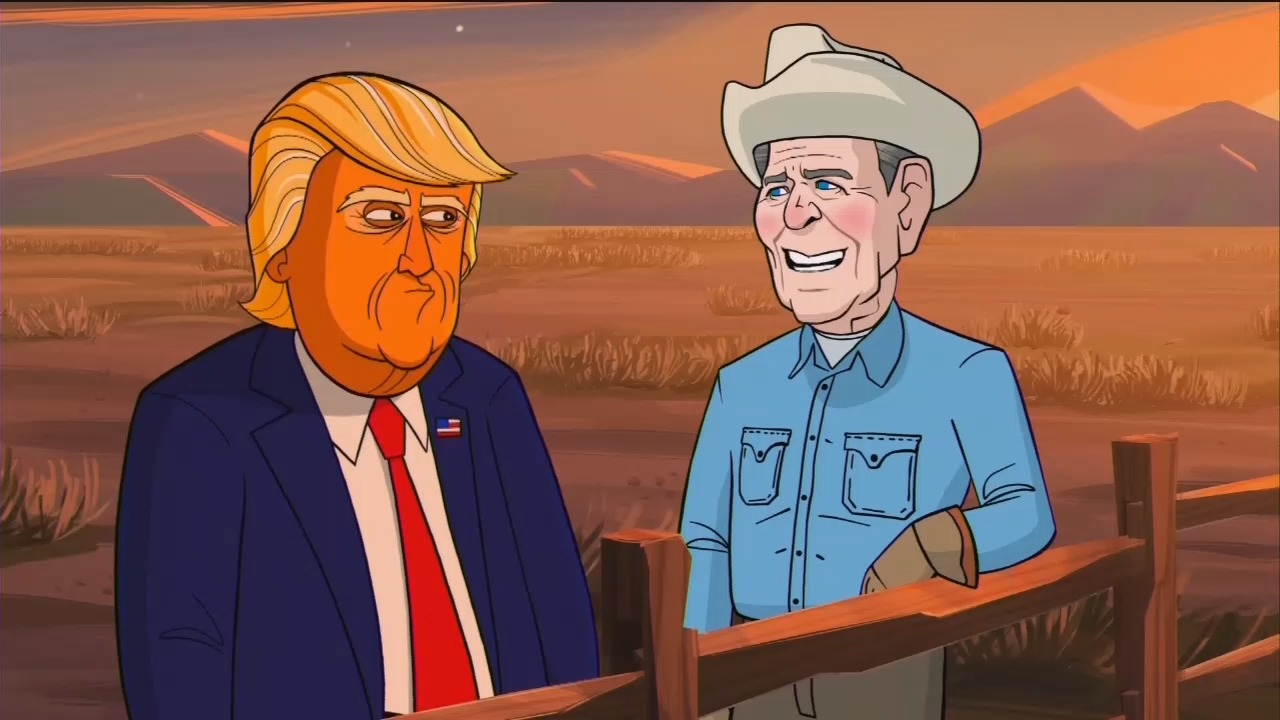 Looking for leverage to get the Democrats to fund a flame-shooting border wall, President Trump promises to refuse to resupply the International Space Station until Democrats agree to the funding in the May 19 episode of Stephen Colbert’s Our Cartoon President on Showtime. Pitting suffering astronauts against the president, media reports cause Trump to begin to lose support. He even loses support from loyal Trump supporters like Sean Hannity, along with Ann Coulter who appears on Hannity’s show.

In the episode titled “The Party of Trump”, Trump supporters, "the deplorables," are depicted as the opposite of “decent” Republicans. In order to fight back against the attacks, Vice President Mike Pence explains to President Trump that being a conservative president is like riding two horses at the same time. There are spitfires "who want to trample poor people," like Coulter, and stallions like Mitt Romney who want to do the same thing "only while carrying a briefcase."

In order to gain favor with the deplorables again, Trump is advised by Stephen Miller to lock Hillary Clinton up, as that is what really gets his supporters excited. So, the FBI arrests her, and Trump declares:

I am proud to announce that, tonight, the Federal Bureau of Investigation arrested Crooked Hillary for the crime of mega-treason, fulfilling one of my strongest and most deplorable campaign promises. In 72 hours, she will receive a fair trial by combat. She's fighting a dangerous jungle cat in the well of the House of Representatives.

Republican donor Sheldon Adelson meets with Trump to explain that he must go back to how Republicans governed in the past. Adelson’s voice sounds like Jabba the Hutt. He tells Trump, "The Republican Party plan is very simple: make the wealthy wealthier," and goes on to talk about how "we influence government to shape the economy to our will." Adelson voices his disapproval that Trump jailed Hillary. “Stop pleasing the deplorables and get back to business as usual,” he says.

Can you imagine the outrage and cries of anti-semitism if a conservative cartoon had done this with George Soros? But Colbert's a liberal and Adelson is a Jewish Republican, so it's ok.

Trump releases Hillary and manages to land in her cell himself. Yes, it’s just silly at this point. Ann Coulter demands that Republicans find a new candidate for president and she’ll run if she has to do so.

Having difficulty finding a balance between Spitfires and decent Republicans, Trump comforts himself by eating spaghetti and meatballs while taking a steam bath. He chokes on a meatball and has a vision of speaking with President Ronald Reagan. The liberal show writers pack the scene with the usual Democrat talking points to trash Reagan. And, Reagan is in Hell, not Heaven.

Trump: Hollywood starlet Ronald Reagan? Wow! So this is heaven.

Reagan: You had a 50/50 shot, but, uh, no. Listen to me, Donald. Everyone's been telling you the Republican Party has two horses and you need to ride them both. But the party is actually one horse with two different heads.

Trump: That last one was you.

Reagan: In a way, they were all me, and I'm not ashamed of it, either. See, an inner-grossness connects all Republicans, even you. Now, go, Donald. Be the grossest Republican you can be. Oh, and one more thing.

Since Reagan told Trump to be super-duper gross, he changes his mind again and tells Don Jr. to instruct Attorney General Barr to issue a warrant for Hillary’s arrest. Trump realizes there is no struggle between deplorables and ‘decent’ Republicans.

This show is what passes as liberal humor aimed at mocking not just President Trump but also his supporters and all Republicans, dead or alive. How insulting to ordinary voters who decided it was time to drain the swamp and elect a non-politician to try a new way in Washington, D.C.