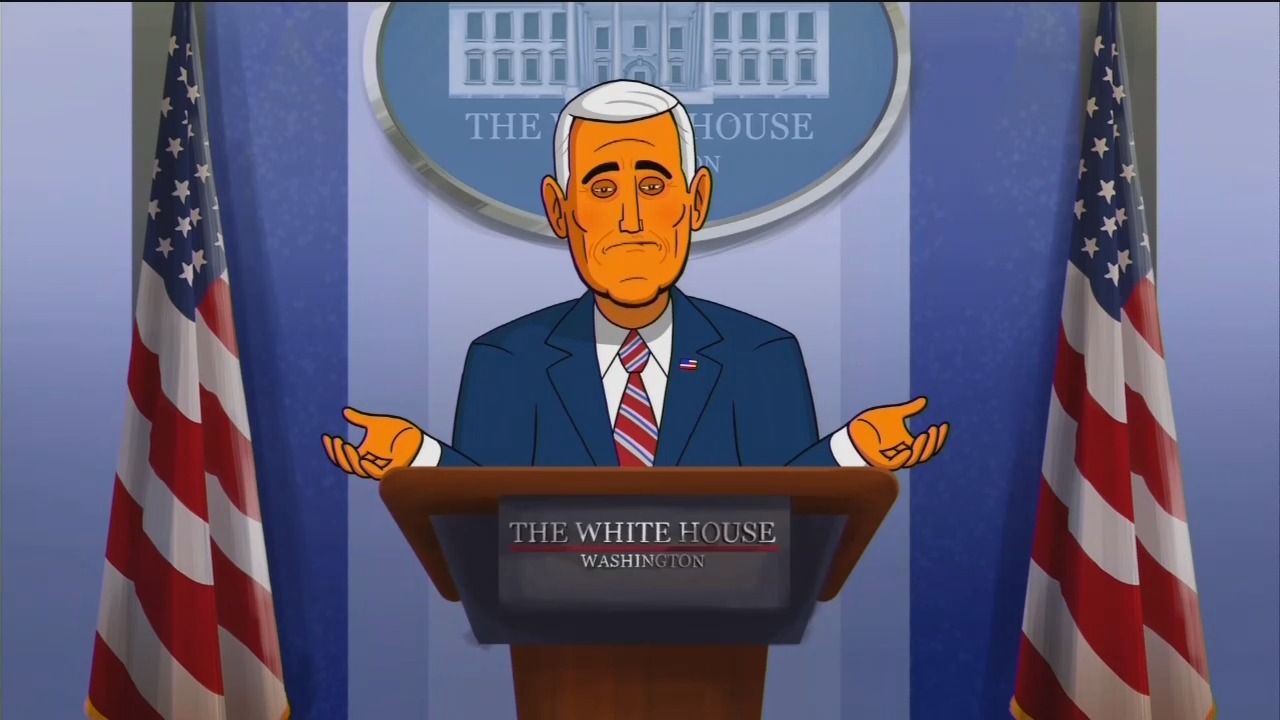 In a move that shows the desperation of the writers of Stephen Colbert’s Showtime animated series, the episode of Our Cartoon President that aired on July 29 shows Vice President Mike Pence confessing to an affair to take the heat off Trump. Pence confesses in a press conference after a trip to Mar-a-Lago with the president and his cabinet.

In “Mueller Probe,” President Trump battles the leaks to the press by his cabinet members. He decides to take squeaky clean Vice President Mike Pence to Mar-a-Lago as a reward for his loyalty. Before he goes, Pence fake tans to orange and his teeth are hyper-whitened because jokes about Trump being orange never get old, right? Second, Lady Karen Pence isn’t invited on the trip. Trump thinks she’s a wet blanket.

Upon his return, Pence calls a press conference and takes the blame for the Stormy Daniels scandal, to distract from the Mueller investigation. Karen Pence is watching on television and is blindsided by this confession and President Trump is heard off camera egging Pence on to get into details.

Pence: It wasn't Donald who made love to Mrs. Stormy Daniels and paid for her silence. -It was me.

Pence: I'm sorry for the pain I caused and thank my wife, Karen, for sticking by my side.

Trump: Get to the juicy stuff!

Pence: Of course. I could sense that Stormy was interested in me, so I put my crucifix in a drawer and downed a-a glass of milk off the room service cart.

Trump: Ooh, this is getting good!

Pence: I then asked her if I could place my hand on her upper shoulder.

How dumb. No one would believe that of Mike Pence because of his reputation as a strong Christian and faithful husband. This presumes he would be dumb enough to fall on a sword to cover for President Trump and that’s quite a disrespectful leap.

Naturally, Karen Pence is none too pleased and leaks the real story to the Washington Post. This upsets the vice president who asks his wife if she really wants to go back to Indiana where he it is known he "gave everybody AIDS." No, really. All the tropes came out in this crazy half-hour against the Pences.

So, Karen goes to apologize to President Trump for leaking the truth. He accepts her apology and tells her she isn’t really a wet blanket after all. She apologizes to her husband that she “sinned against God by opposing Donald Trump.” Vice President Pence replies, "I wish God wanted me to apologize, too, but Romans 13 says, 'The authorities that exist are appointed by the Lord.' God made Donald Trump president and to not take credit for plowing an adult film star is an affront to our Lord." Ugh.

At the end of the episode, in a riff on the movie The Breakfast Club, subtitles appear with updates on the president and those around him. Of Trump it says, “President Trump ended his first term embroiled in scandal. He was later arrested for multiple class-C felonies and spent the rest of his life in prison." The subtitles go on to include that all the cabinet members died in prison. It's said that Sean Hannity "died on the toilet" and Jared Kushner “ratted out his family, buying his freedom and a second chance at life. He was later arrested for unrelated crimes and died in prison.”

Our Cartoon President relies on acting out every sick fever dream against President Trump and his administration, often including his family members. This episode was no different. We can only hope that the show isn’t renewed for even more of the same for another season. Enough is enough.