Actor Chris Pratt accepted the 2018 MTV Movie & TV Awards show’s Generation Award and delivered a powerful and moving speech to the young audience that was sorely needed. Taped on June 16, the show was broadcast June 18 and Pratt’s speech alone was worth slogging through the rest of the show.

Pratt is known as a man of faith, a rarity in Hollywood. He happily accepted the responsibility as “their elder” to deliver a comedic message of hope and inspiration to the audience. He combined some basic messages about life in something he called "9 Rules from Chris Pratt, Generation Award Winner."

The rules led off with some basics like remembering to breathe and to serve others. He reminded the MTV audience that they have a soul and to be careful with it. He veered off into some silliness for levity and then he let them have his testimony. He told them that God is real and that He loves them. He spoke about grace and said, "Like the freedom that we enjoy in this country, that grace was paid for with somebody else's blood." That was probably the last thing I expected to hear while tuning into MTV.

Thank you. This being the generation award, I'm going to cut to the chase and I'm going to speak to you, the next generation. Okay? I accept the responsibility as your elder. So listen up. This is what I call nine rules from Chris Pratt, Generation Award Winner.

Number one, breathe. If you don't, you'll suffocate.

Number two, you have a soul. Be careful with it.

Number three, don't be a turd. If you're strong, be a protector. And if you're smart be a humble influencer. Strength and intelligence can be weapons. And do not wield them against the weak. That makes you a bully. Be bigger than that.

Number four, when giving a dog medicine, put the medicine in a little piece of hamburger. They won't even know they're eating medicine.

Number five, doesn't matter what it is, earn it. A good deed. Reach out to someone in pain. Be of service. It feels good and it's good for your soul.

Number six, God is real. God loves you. God wants the best for you. Believe that. I do.

Number seven, if you have to poop at a party, but you're embarrassed because you're going to stink up the bathroom, just do what I do. Lock the door. Sit down. Get all the pee out first, okay? And then once all the pee's done, poop. Flush. Boom. You minimize the amount of time that the poop is touching the air. 'Cause if you poop first, it takes you longer to pee. Then you're peeing on top. It's stirring it up. The poop particles create a cloud. It goes out and then everyone in the party will know that you pooped. Just tro -- just trust me. It's science.

Number eight, learn to pray. It's easy and it's so good for your soul.

And finally, number nine, nobody is perfect. People are going to tell you, you're perfect just the way you are. You're not! You are imperfect. You always will be. But there is a powerful force that designed you that way. And if you're willing to accept that, you will have grace. And grace is a gift. And like the freedom that we enjoy in this country, that grace was paid for with somebody else's blood, do not forget it. Don't take it for granted.

God bless you. Please get home safely. Thank you.

When was the last time you heard all that in an acceptance speech from a member of Hollywood? Yeah. Never. 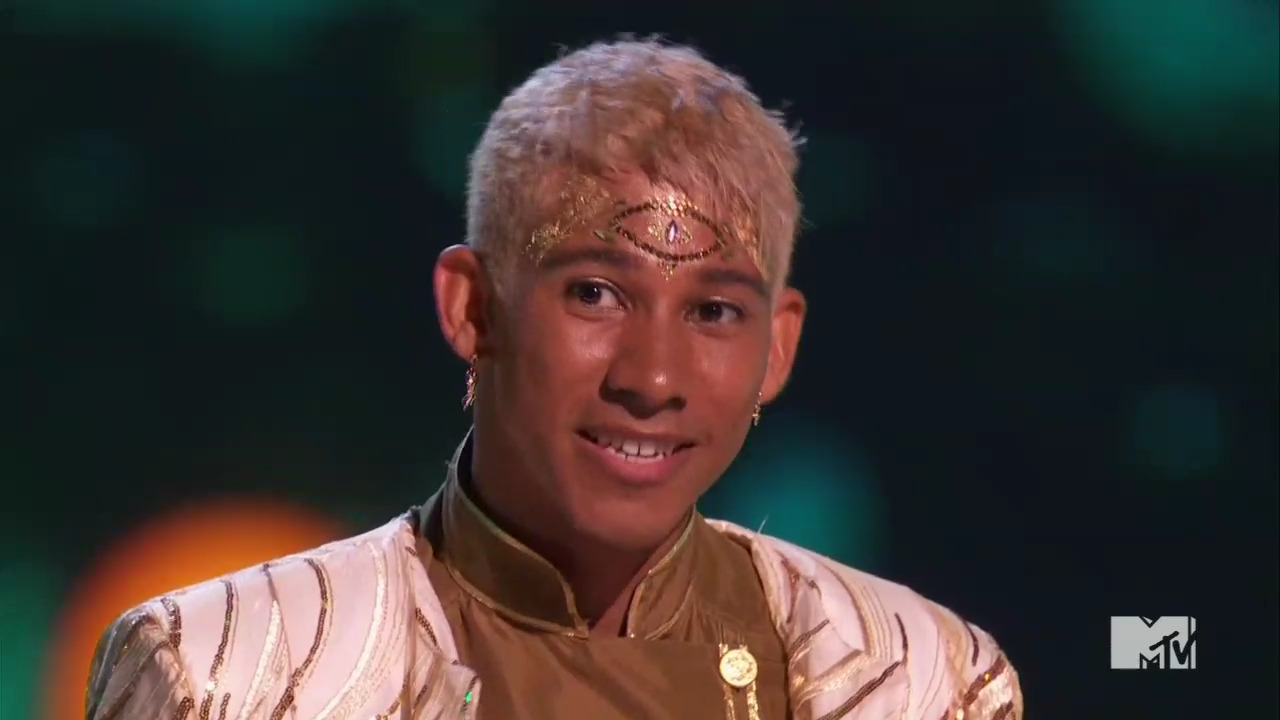 It was a welcome contrast to, say, Keiynan Lonsdale who accepted the award for Best Kiss for a gay kiss between him and another male actor. Wearing a long dress and makeup on his forehead (right), Lonsdale had a message for "every kid:" “You can live your dreams and wear dresses... you can live your dreams and kiss the one that you love no matter what gender they are.” You get the idea.

A nice moment happened as the first award of the night was presented to Chadwick Boseman in the Best Hero Award category. The Black Panther star brought a special guest with him to the ceremony. He surprised James Shaw, Jr. by asking him to come up on the stage with him. Shaw is the humble hero who fought off a bad guy during the mass shooting at the Waffle House in Antioch, Tennessee.

Of course, there was a lame reference to the Roseanne Barr controversy when Michael B. Jordan won the Best Villain Award for his role in Black Panther. He said he was shocked to win the award and then followed up with, “I thought for sure Roseanne had that in the bag.” Sigh.

All in all, I have to say it was a tame show compared to most of the awards shows we cover. There wasn’t the usual barrage of political slams against guns or the NRA or vulgar language aimed at President Trump, which was refreshing, although there was plenty of foul language and sex jokes. I’d like to think Chris Pratt’s speech will have some positive effect on the future of the show but I won’t hold my breath.