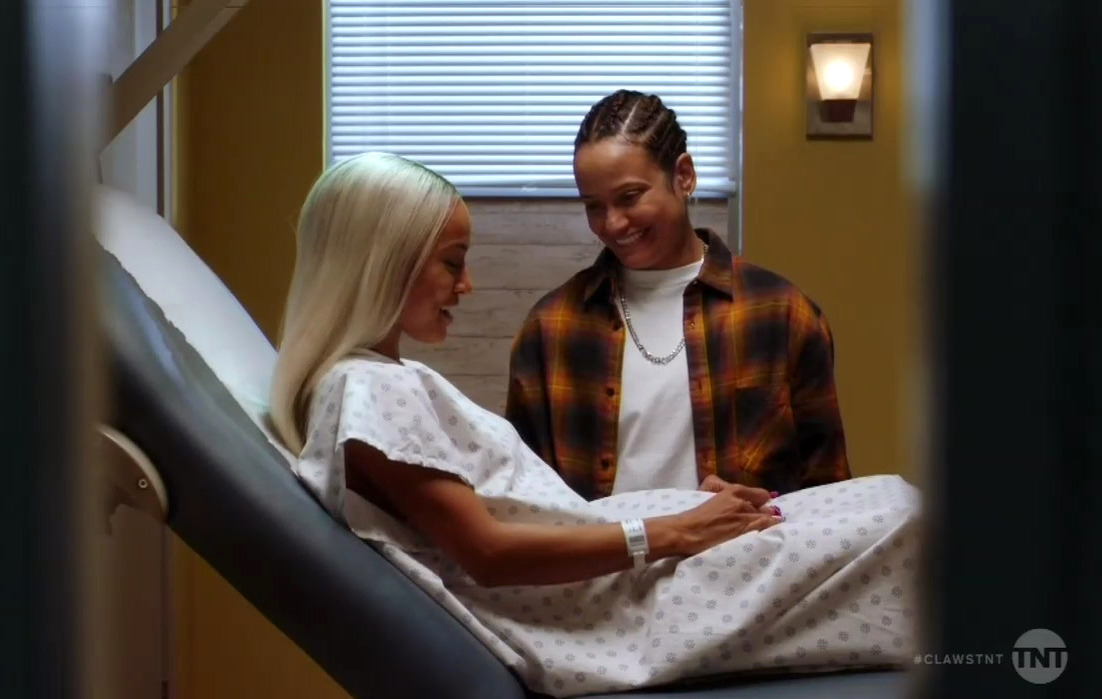 It only took two episodes for the second season of TNT’s over the top dramedy series, Claws, to broach the topic of abortion. The storyline played out with some bizarre twists, including the young woman wondering if she is carrying “the next Obama” but then callously declaring she "D&C'd that shit, bitch!"

In the episode airing June 17 titled “Cracker Casserole,” nail salon worker Virginia Loc (Karrueche Tran) decides to get an abortion and the baby’s father, Dean Simms (Harold Perrineau), is ok with it because they are not ready to be parents. Dean, the autistic younger brother of nail salon owner Desna (Niecy Nash) supports the decision with the line that is often uttered by the pro-abortion crowd, “Women have the right to choose.”

As Virginia, Dean, and Quiet Ann (Judy Reyes) enter the abortion clinic grounds, they're confronted by protesters because in the minds of liberal, pro-abortion Hollywood, there are always angry protests by pro-life people screaming at pregnant women outside clinics. As the sign welding crowd shouts at Virginia and Dean, Dean lets loose and tells the crowd that he was an unwanted child and how hard his life was on government assistance. He tells them that “you only care about babies in the womb,” another typical liberal trope that ignores all the good works pro-lifers do through charities, donations, and volunteering.

Adding to the craziness of the situation with the protesters, after the abortion, Dean asks Virginia to marry him. On the way out, the protesters are still there and Dean announces that he proposed to Virginia. The crowd is happy and assumes that this means Virginia didn’t go through with the abortion. She quickly assures them that she did, in fact, “Still D&C’d that shit, bitch," referring to the abbreviation for the dilation and curettage abortion procedure. Lovely way to refer to a baby, right?

Dean: We're getting married, everybody!

Woman: God is good! He heard our prayers.

When Virginia was sitting on the table waiting for the abortion, she appeared to have some doubts and asked Quiet Ann the random question, “What if it’s, like, the next Obama?” She can't remember the name of Martin Luther King so presumably we're supposed to think this girl is too stupid to have a baby and agree with her decision to abort.

Virginia: Are you sure?

Virginia: There's no Obama in there?

And there was one more bizarre aspect to this part of the show. When Virginia asked co-worker Quiet Ann, who gave them a ride to the abortion clinic, what the others at the nail salon were saying about her pregnancy and the decision to abort the baby, Quiet Ann goes into a thought bubble that turns into a retro Brady Bunch type of panel. The women in the panel give their hot takes on abortion.

Desna: This bitch is having an abortion.

Jennifer: Girl, she'll be fine. I had two. I didn't think twice about it.

Older lady: At least she can get one. Back in Texas, they were illegal. I had to go to that nice lady in the deli for mine.

Black woman: Oh, my Lord. You are all going to hell.

Polly: Where's my dad going? He raped my babysitter. Thank God she could have one.

Desna: Polly, you never told us that.

Woman: Look, I think women should have the right to choose, but some need to choose a condom. I shouldn't have to pay for it.

Quiet Ann: You're not paying for anything.

Woman: My tax dollars are.

Woman: Well, at least these women can have kids.

Desna: It's about a woman's right to choose what she wants to do with her own body.

Quiet Ann: Yeah, I got pregnant when I was real young, and I didn't want to have a kid, but my parents were against abortion, and they made me. And I got attached to that kid. Sofia. And one day I got home, and Sofia was sent to California to live with some church friends. I never saw her again.

It was all quite crazy but this show is known for odd parodies and random craziness. Season two looks like nothing has changed. What a mess.