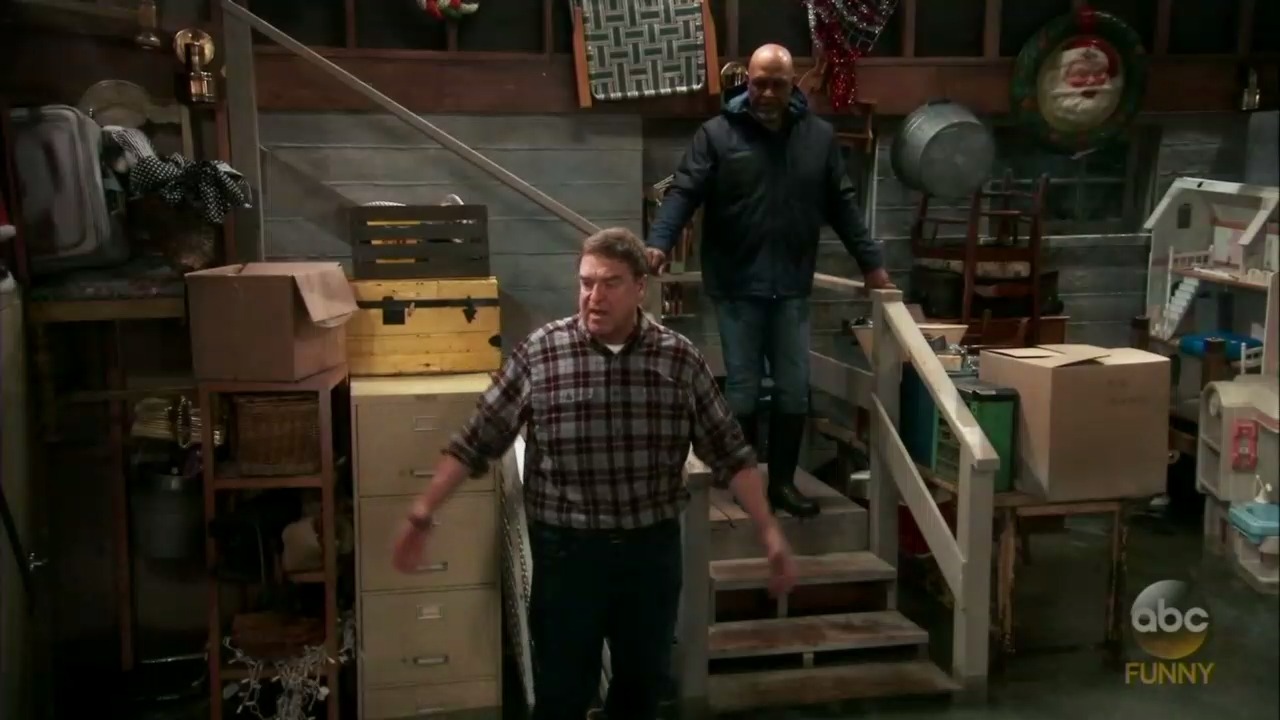 In the May 22 season finale of ABC’s Roseanne, titled “Knee Deep,” Roseanne is in need of knee surgery but the family doesn’t have the money to cover it. Desperate to find a way to bid jobs cheaper to win contracts, Dan decides to hire illegal aliens for the first time.

Dan (John Goodman) and his partner and best friend Chuck Mitchell (James Pickens Jr.) are union construction workers and Dan has been losing jobs because of illegal aliens. Builders are cutting corners by hiring illegal aliens for less money than union workers make and Dan decides to do the same to win some jobs for himself. This means he can’t afford to hire Chuck as a part of the work crew. Chuck finds out from a third person and comes to confront Dan about it as he is assessing flood damage in the basement.

Chuck: Whoa! Looks like you got a leak somewhere.

Chuck: Well, you know I'd help you out, but you probably found someone cheaper.

Dan: This is a bad time, Chuck. How about we talk later?

Chuck: I just ran into one of the Gonzalez brothers at Home Depot, and he said you're using his guys on the condo job?

Dan: I was gonna tell you.

Chuck: When? After you finished the job?

Dan: Of course not. Look, I just can't afford you guys.

Chuck: "Y-you guys"? Ohhh. That's what happened. And I thought the whole time that we were friends. Turns out I was just one of the guys.

Dan: I don't have a choice, man. I got responsibilities.

Chuck: Yeah, right. And I'm still working construction because I like the way I look in the hat.

Dan: What do you want me to do? I got three extra mouths to feed since Darlene moved back in. Roseanne started popping pills because we didn't have the money to fix her knee. And now I got 20 grand of water damage. I've spent my whole life hanging on by my fingertips, telling everybody not to worry, that I was gonna make it okay because that's my job. Well, now I can't promise that anymore. So, yeah... It makes me sick. But I'm gonna do whatever I have to do to take care of my family because I'm old, I'm tired, and I'm not sure how much longer I can hold on.

The flood does so much damage in Lanford and across the state that the president declares a State of Emergency for Illinois, which is good news for Dan. That declaration means that the Conners will be eligible for FEMA funds. Dan can do the work himself and use the leftover money for Roseanne’s knee surgery. And, as for Chuck, he and Dan reconcile and, with all the work that needs to be done to repair the town, Dan makes Chuck a full partner.

This episode has a happy Hollywood ending but in real life, the last thing families want is for it to take a natural disaster and federal aid to get them out of the hole. Employers hiring illegal aliens creates unemployment and low wages for American workers, period. That unhappy ending for regular working men and women is very real and one that Hollywood all-too-rarely shows.