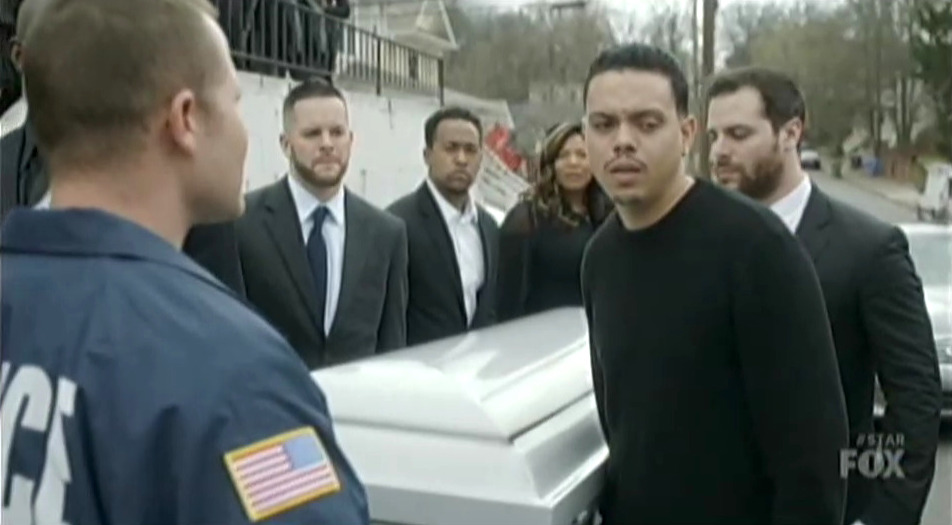 During the May 16 episode of Fox’s Star, ICE agents were portrayed as unfeeling ogres, as is currently the style this season on network television shows, but this one hit a new low. After a funeral, ICE surrounded a church to haul off one of the pallbearers, leaving his family and friends crying and screaming in the street with the casket.

In the episode titled “Mrs. Rivera,” Angel Rivera (Evan Ross) has been denied his DACA application and served with a notice to appear in court. As an earlier episode revealed, Angel was brought to America at an early age by his mother from the Dominican Republic. He only recently learned that he is an illegal alien. Meanwhile, he married fellow singer Simone (Brittany O’Grady) only to learn that marriage doesn’t guarantee legal status in his case.

Angel and Simone decide to run from the law before the court appearance but the death of his uncle slowed all that action down. So, as the funeral ends and Angel is helping carry the casket out of the church, the agents with ICE come speeding up and to detain Angel.

Naturally, instead of allowing him a moment to finish carrying the casket into the hearse a few feet away, they tell him, "We don't wait on criminals" and grab him.

ICE Agent: Angel Rivera, you are to be detained by U.S. Immigration and Customs Enforcement.

Second Agent: I'm gonna ask you folks to step aside.

Angel: Yeah, I know what you're doing here. Uh, could I just bury my uncle, please?

Agent: We don't wait on criminals.

Carlotta: He's not a criminal. Let him bury his uncle.

Angel: Get off me! Stop it! Get off me. Have some respect.

Simone: Angel, look at me!

Carlotta: We gonna figure it out.

The government-owned SUVs speed off with Angel in custody and the episode ends at that. Next week is the season finale so this is the hook to get viewers to watch the final episode. Funny how we didn’t see these kinds of cliffhangers during the previous administration, isn’t it?