‘Roseanne’ to Muslim Neighbors: 'We Don’t Hate You, We’re Afraid of You' 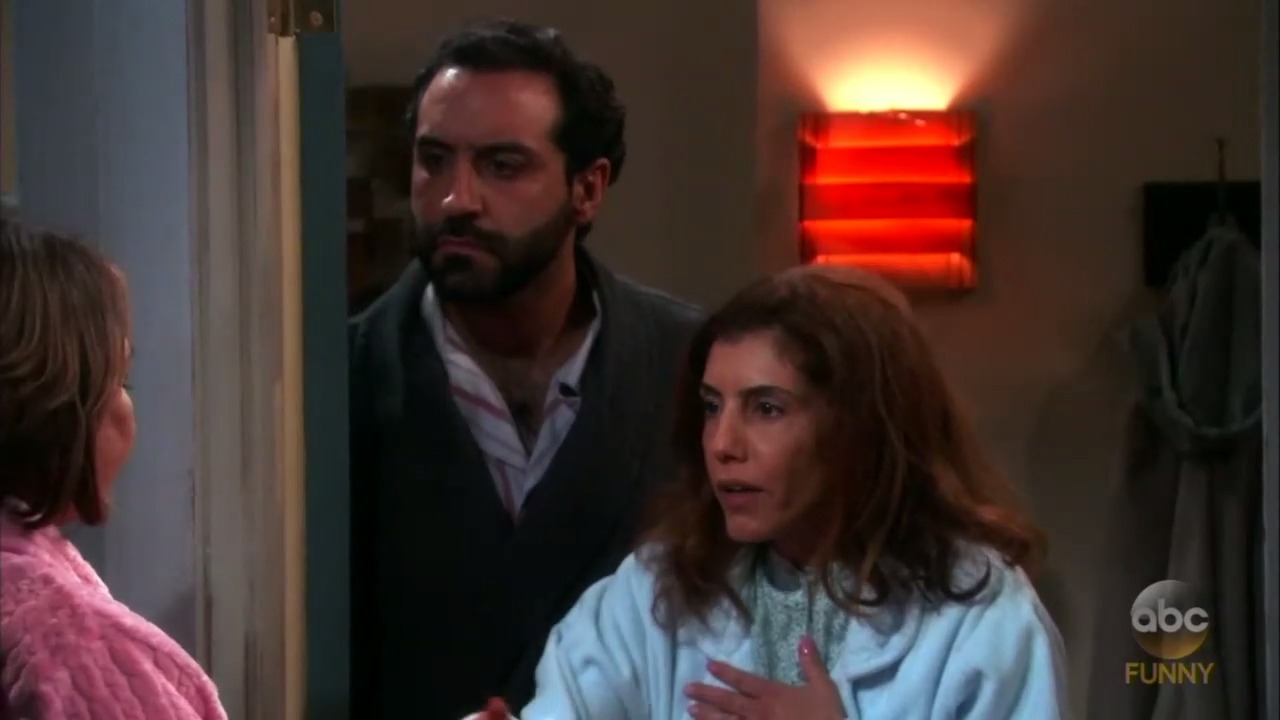 The May 8 episode of ABC’s Roseanne titled “Go Cubs” introduces the Connor’s new neighbors, a Muslim family from Yemen. Roseanne uses a visit to their home as a way to ease her fear of them.

Roseanne Connor (Roseanne Barr) and her sister Jackie (Laurie Metcalf) have been going back and forth about the new neighbors. Roseanne is convinced they could be terrorists because there is a large amount of fertilizer by their garage. Fearing a potential bomb-making opportunity, she gets Jackie to check it out and she agrees it is a very large amount of fertilizer.

Granddaughter Mary (Jayden Rey) has an opportunity to Skype with her mother stationed in Afghanistan but it is scheduled for 2:00 A.M. and the WiFi goes out at the Connor’s house. (Roseanne didn’t pay the bill.) So, Roseanne and Jackie muster up the courage to go over to the new neighbors’ house to ask to borrow their WiFi password. Even though it is in the middle of the night, they get to know each other and agree to give out their password, after Roseanne turns down their invitation to come inside and just use do it at their house, for a stronger signal.

The encounter begins with Roseanne and Jackie deciding to set aside the baseball bat they brought for protection and ends with a bit of sanctimony from Fatima (Anne Bedian).

Roseanne: Nice work, Jackie. Uh, here's a plant. Welcome to the neighborhood. Um, we know that this is a crazy time to wake somebody up, but, you see, our Wi-Fi went out, and we need to make an emergency Skype call. And we were just wondering if you could be so kind as to, uh, lend us your password.

Samir: Are you drunk?

Jackie: No, no. That's really the reason why we came over. But "Drunk" is a good guess on any other night.

Fatima: I'm Fatima al-Harazi, and this is my husband, Samir.

Jackie: Oh, I'm sorry. That was so rude of us. I'm Jackie, Roseanne's sister. I'm a certified life coach if you're having any trouble assimilating.

Roseanne: Not now, Jackie! Yeah, well, my little granddaughter, you know, she needs to talk to her mother, and it's a whole other time zone and everything 'cause her mom's in Afghanistan.

Fatima: What does she do in Afghanistan?

Roseanne: Uh...She's in the Army. If you guys have any family over there, let us know, and we'll put in a good word with the drone people.

Roseanne: Oh, good. Yemen's not even on the travel ban list.

Fatima: Yes, it is. Roseanne, why don't you just bring your granddaughter over here to Skype. The signal will be much stronger.

Samir: You don't want us to see the Skype, so we'll know where in Afghanistan her mother is, right? Because you think we'll find out her coordinates and give them to our ISIS friends on Facebook. You see, they hate us.

Roseanne: We don't hate you. We're scared of you.

Samir: Yeah, we're scared of you, too.

Roseanne: Well, we have way more reason to be scared of you. How do you explain all that fertilizer in your yard?

Fatima: That's because genius over here doesn't know every time you click on the Amazon order button, you're putting another 50-pound bag in the cart!

Fatima: Kazim, go back to bed. Everything is fine.

Roseanne: Wow, you only told him once, and he listened right away. I hate to ask how you discipline him 'cause that looks like a bulletproof vest.

Fatima: Yes, it is. Some people yelled some pretty terrible things at us the other day, and he started to have nightmares. Helps him feel safer. "Go Cubs".

Jackie: Oh, that is so funny because you should hear what we were guessing that your pass—

Roseanne: No. Well, it's so kind of you, and we really appreciate it. Thank you so much.

Fatima: It's the right thing to do. The ignorance of adults shouldn't punish children.

You’ll note that Samir answered the door with a baseball bat in his hands! Lol! Their exchange was tame enough, the final accusation of ignorance was a bit on the nose. Americans are certainly entitled to have a degree of caution around those who come from dangerous areas of the world where many want to kill us. The bullet-proof vest on the child was a bit much.

A nice scene in the ending of the show has Roseanne running into Fatima at the grocery store. During her check-out, Fatima doesn’t have enough money on her EBT card to cover her groceries so Roseanne whips out her EBT card and pays the amount that Fatima is short - $30.00. The cashier goes on to make rude remarks to Fatima.

Roseanne: Oh, hi. How you doing?

Roseanne: Sorry about that.

Fatima: Why not? It's food.

Roseanne: The government doesn't want to pay for it because they think that prepared food is a "Luxury item." You know how rich people have yachts and summer homes? We have pre-cooked chicken.

Cashier: Sorry. Maybe the American taxpayers forgot to fill it up last week.

Roseanne: Excuse me? I'm an American taxpayer sometimes. Put it on my EBT card.

Fatima: You don't need to do that.

Roseanne: Well, we're stealing your cable, so this probably makes us even.

Cashier: Maybe you can help her carry the groceries out to her camel, too.

Roseanne: Mm-hmm. Hey, you know that saying, "See something, say something"? Well, I saw something, and I'm gonna say something to your manager. You are ignorant. That woman is twice the person you'll ever be. And she's dealing with a lot of stuff you don't even know about. So, next time she comes in the store, you keep your damn mouth shut. She's got enough fertilizer to turn this place into a smoking hole in the ground. Now, will you take a coupon from another store?

I am glad the show points out that it is the American taxpayer who foots the bill for immigrants who need to be on public assistance. The camel crack by the cashier was a bit much, though.

All in all, the show handles the dialogue well. It wasn’t all so heavy-handed that Americans should feel guilty for feeling cautious around strangers from countries in the Middle East.