Wait. Did Stewie Just Come Out as Gay on ‘Family Guy?’ 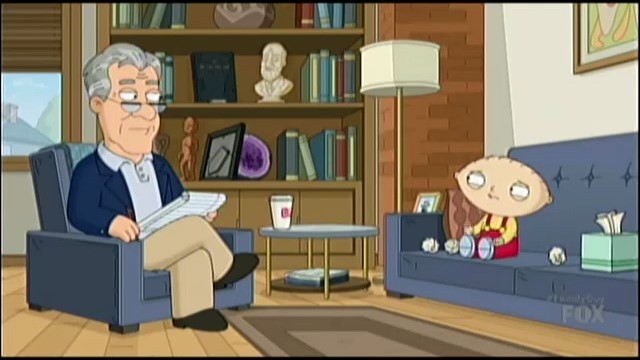 The buzz was that Fox’s Family Guy would air an episode where toddler character Stewie Griffin would come out as gay. In the March 18 episode titled “send in Stewie, Please,” Stewie visits his school’s psychologist and tells his troubles in the form of monologues and the audience learns some surprising things about the little tyke.

The commercial-free story has Stewie being summoned to the psychologist Dr. Pritchfield's (Ian McKellen) office after he pushed a classmate, Tyler, down some stairs. Once inside the office, he comments in a long dialogue about the décor of the room, references Bravo television shows and then picks up a photo of the psychologist and his younger, handsome husband. In his snarky gay-accented dialogue, Stewie describes the couple, their relationship and their trip from which this photo was taken. The dialogue is filled with references familiar to gay viewers on clothing and travel.

Then Stewie addresses his sexuality in a roundabout way.

Pritchfield: It seems like you're keeping a lot bottled up inside.

Stewie: I am. Nobody here likes me, Dr. Pritchfield. I try to fit in with the other boys and talk about things like dirt and shapes, but they won't play with me. And I-I don't have any friends, and I have nobody to eat lunch with.

Pritchfield: It's very interesting you'd say that you have no friends, Stewie, especially considering the reason you're here.

Pritchfield: Shall we talk about it?

Stewie: I don't know what there is to talk about.

Pritchfield: You pushed a classmate down the stairs.

Stewie: It was an accident. Haven't you ever seen Showgirls?

Pritchfield: Yes, of course I have. But according to Tyler, it was no accident.

Stewie: Well, I guess it's my word against his, then.

Stewie: I don't know what that is.

Pritchfield: Apologies. Those of us with British accents pronounce it "Con-trah-versy." But how would you know that?

Pritchfield: But, again, how would you know? It's not as if you're...

Stewie: Okay, okay, we got it. I only pushed Tyler down the stairs because I like him and I'm afraid he won't like me back. And-and not like him-like him. I'm not gay. This whole thing isn't because I'm gay, so-so calm down. I can already see you lickin' your chops. I'm sure you live for the coming out sessions. If anything, I'm less gay than I used to be. Not that anybody at this school would care. But do I think that Grant Gustin and I would me the most adorable Instagram couple? Yes. Yes, we would. Grant Gustin plays the Flash on the CW, if you were wondering. Because, you know, most people over 70 probably don't know who he is. Think young Anthony Perkins.

Stewie: There we go. Anyway, "Fluid" is something I hear being tossed around a lot now. But I'm confident in my heterosexuality. That's a word, right?

Pritchfield: It must be difficult for you, Stewie, being so intelligent.

Stewie: It is. Whew! Just that... Just that acknowledgement. You know, sometimes I don't know where I fit in. I just... I just want to be like everybody else, but nobody's interested in the things that I'm interested in. They think I'm weird.

So, despite the description by some in the press that this is a coming-out episode for Stewie, it really wasn’t. Also, remember that Stewie is in pre-school and drawn as a toddler. Sexualizing him at all is perverse.

In the end, after the viewer feels a bit sorry for the little guy as he opens up about being a lonely child with no one to eat lunch with, he soon snaps back from being vulnerable to being his usual evil self. He watches the psychologist suffer a heart attack and refuses to fetch his medicine from a nearby table. The doctor dies. Stewie did it so that no one would know his true self. The doctor had to die. Yikes.

The story finally ends with Stewie having a bad dream – I would hope so after that day – and his dog, Brian, comes to sleep with him for comfort.

This show went the long way around to let the viewers know that Stewie doesn’t think he’s gay, or even “fluid.” I suppose in today’s entertainment world, we should be grateful for that.

The bigger coming out event was Stewie speaking with an American accent for the first time in this episode. Yeah, let’s bring on more of that, please, instead of the phony put-on British accent. Let Stewie be a kid.