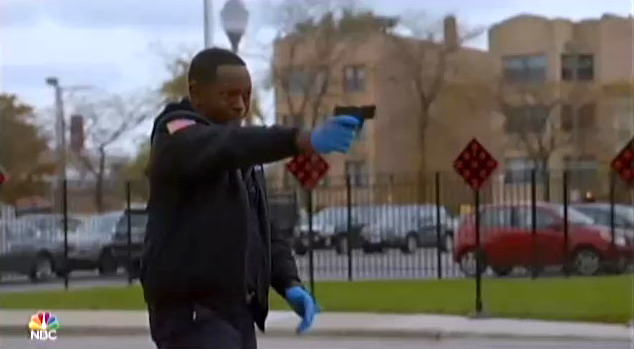 In the February 27 episode of NBC's Chicago Med, titled “Down by Law,” three innocent lives were saved because a good guy, an Emergency Medical Technician (EMT), was carrying a gun during a drive-by shooting.

The EMT, Barry Vaughn (James Vincent Meredith), lingered a bit at Gaffney Chicago Medical Center after delivering a patient to the emergency department to visit with the ED’s charge nurse, Maggie Lockwood (Marlyne Barrett). The two are working on resuming their personal relationship.

This proved to be fortuitous because as he exited the building, gunshots rang out from an SUV in a drive-by across the block. Barry and Dr. Natalie Manning rushed to administer aid to a young man shot in the chest, but seconds later the SUV came back for a second pass at the victim and Barry responded by returning fire. Dr. Manning hit her head as Barry pushed her out of harm’s way and he was shot in the leg. All three would likely would have been fatally shot if Barry didn't have his gun.

Noah: All right, just a tangential wound. Nothing to do but dress it and let it heal on its own.
Barry: Told you it wasn't anything to worry about.
Maggie: Okay, tough guy. And why didn't you ever tell me you carry a gun?
Alvin: Maggie?
Maggie: Oh, hey, Alvin.
Alvin: - Mr. Vaughn, I'm Detective Olinsky with the Chicago Police Department.
Maggie: Alvin, can this wait? He's being treated.
Barry: It's okay.
Alvin: Listen, we're gonna need your weapon.
Barry: Course, yes, sir. It's locked in the glove compartment of my rig.
Alvin: Uh, it's now evidence. Uh, you got a concealed carry permit?
Barry: Yeah. There you go.
Alvin: You always got a gun at work?
Barry: Uh, I've been carrying for a couple years. Necessary precaution.
Maggie: And it's a good thing he does. He saved three lives today.
Noah: For real. Barry, you the man.

But you knew NBC couldn't just end this as a happy story of an armed hero saving lives.

It turns out another bystander was wounded in the shootout. After the man had surgery and the bullet inside of his body was retrieved and analyzed, it's found to be Barry’s bullet. Then, though he acted in self-defense, Barry is arrested because the paperwork for his concealed carry license is found to be problematic. Apparently at one time he changed his identity to mask a juvenile record but didn't disclose that when applying for his permit. The State’s Attorney decides to press charges against him and Maggie is left devastated that he lied to her about his past as the episode ends.

Right. Because Barry's the bad guy here, not the gangbangers shooting into crowds from an SUV that the police don't seem to have much interest in pursuing. Suddenly liberal Chicago's out of control crime problem all makes sense.