Cartoon Trump to CPAC: 'Mitt Romney Can Spit Shine My Nipples,' NRA's LaPierre Has 'Blood on His Hands' 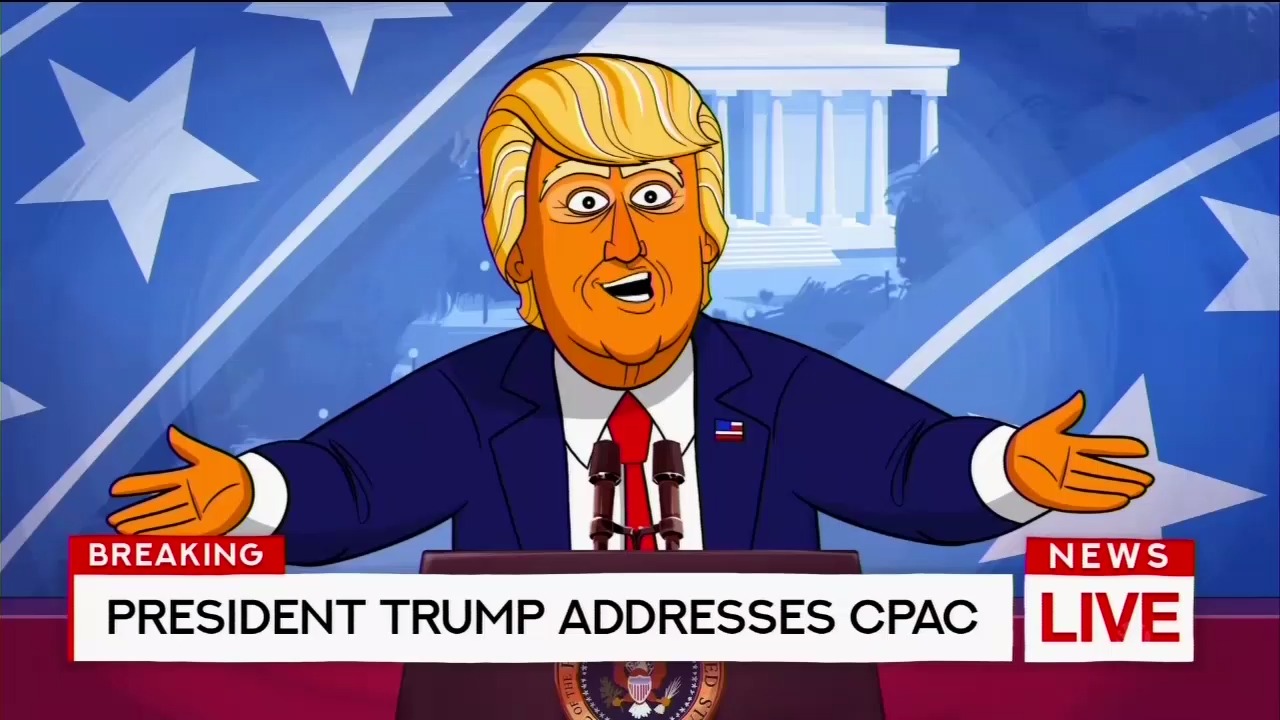 The fourth episode of Showtime’s Our Cartoon President that aired on February 25, titled “Family Leave,” opened with a parody of Trump’s appearance at CPAC – the Conservative Political Action Conference – that took place over the weekend. Trump slams Mitt Romney’s run for the Senate by saying he can’t drink coffee because of his Mormon religious beliefs but he can “spit shine my nipples all the way to the United States Senate!”

Bringing in a reference to the school shooting in Florida two weeks ago, Trump went on to smack NRA’s Wayne LaPierre by telling a waiter to “bring Wayne a wet nap. He’s got blood all over his hands.” And “Wayne LaPierre is so complicit that Poland just made it illegal to talk about him." I wonder how many of this lame cartoon’s viewers will get the reference to Poland’s recent passage of a Holocaust speech law making it illegal to make reference to Poland’s complicity in the deaths of Jews during World War II.

Trump: Good morning, supporters, disgraced sheriffs, spineless pastors, French Nazis, and, of course, schizophrenic YouTubers! People are saying the Republican Party lacks integrity, and I say, "Don't you talk about Mitt Romney like that!" Welcome to my endorsement club, Mitt. You're seated next to Roy Moore and his "Nieces." As a Mormon, Mitt can't drink coffee, but apparently, he can spit-shine my nipples all the way to the United States Senate!

Trump: But look. I want to make sure that only mentally stable people can buy a gun that would've single-handedly brought the Roman empire to its knees. That's why I consulted the top minds near the Mar-a-Lago wet-towel bin -- three buck-naked guys named Murray. And Murray, with the second-biggest dong, mentioned that Australia banned big guns, and now it's overrun with scorpions and crocodiles! Not much better. Speaking of reptiles, NRA sweetheart Wayne LaPierre is here. Waiter, bring Wayne a wet nap. He's got blood all over his hands. Do you know how complicit Wayne LaPierre is?

Audience: How complicit is he?!

President Trump: Wayne LaPierre is so complicit, Poland just made it illegal to talk about him. Ah, we love Wayne, don't we? Good guy with a tough job. Devin Nunes! Get him a seltzer, will you? Hurry up, you putz!

Fox and Friends entered into the show’s mockery of conservatives this week, too, with a storyline about co-host Brian Kilmeade’s difficulty in accepting Ivanka Trump’s policy initiative of paid family leave for working parents. Kilmeade rightfully calls it another government hand-out. He ends up having a mental breakdown before he finally snaps back and returns to the show. President Trump is distraught during Kilmeade’s absence because his favorite show isn’t the same without him. Clearly, Our Cartoon President’s writing staff (including Trump-hating late night show host Stephen Colbert) doesn't think the morning show’s viewers are worthy of respect.

As you can see, Colbert's cartoon isn’t getting any better with time. It continues to be tediously unimaginative and repetitive with its lame caricatures of conservatives. Let’s see how long it lasts.