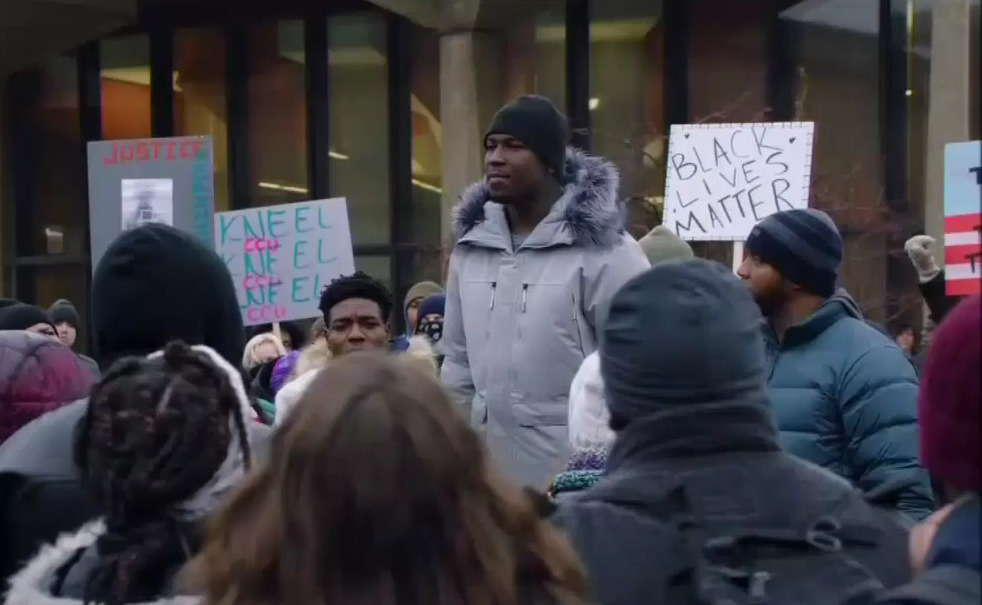 The February 7 episode of NBC’s Chicago P.D. titled “Anthem” begins with the familiar scene of a student protest over the suspension of two college basketball players for kneeling during the National Anthem. What complicates the story is that the organizer of the Black Lives Matter protest is the child of a Chicago police officer.

Brianna Woods (Alexa Adderley), daughter of Lt. Denny Woods (Mykelti Williamson), is described by her father as an “idealist.” I would call her a social justice warrior. She is angry that her basketball player boyfriend, Jamal Tate (Bouton Fitzpatrick), and his friend, Chris Taylor, were suspended from playing on the team for kneeling during the National Anthem. She disputes that it's disrespecting the flag, saying, “Kneeling is actually a sign of respect.”

She first pens an op-ed in the student newspaper and then organizes a rally. As is often the case on TV these days, neo-Nazis come to disrupt the rally and the police are prepared to take action, paying particularly close attention to white supremacist "David Dixon."

Brianna: As Americans, we don't just have the right to protest racism and injustice. We have the duty. But when Jamal Tate and Chris Taylor took a knee to protest police violence, they were suspended. They cannot suspend our freedom of speech and our freedom to protest.

Chris: Racism is so American that when we protest racism, some people think we protest America. But protesting injustice, that's what the flag stands for.

Jay: I got no respect for this kid. I got six friends who died for that flag. Any sign of David Dixon?

Amos: I didn't come all this way to get herded like cattle.

Brian: Where you from?

Amos: Battle Creek.
Brian: You mean where David Dixon's from?

Amos: Yeah. That's right. You a follower of David's?

Antonio: Got eyes on Dixon. He just got here.

David: Those people over there, they hate our country, huh? - Disrespecting our police, disrespecting our flag, right? And my question to you is, what are we waiting for, huh? Let's go do something about it!

As police break up the crowd, Brianna is injured and Chris is found killed in the parking garage. Shockingly, it turns out that the neo-Nazi isn’t the murderer (although he admits to following him into the garage to "give him a beat down"), it's a gang leader who has been paying Jamal and Chris to shave points off the games so he can make money gambling on the scores.

Jamal confesses that he and Chris deliberately got benched at the last game. They knew taking a knee would be punished and they were looking for a way out of their dealings with their gangbanger friend. Jamal makes a deal with the police to wear a wire so CPD can catch the gang leader admitting to killing Chris in exchange for dropping the charges against him.

Lt. Woods talks with Brianna and says Jamal may not avoid jail time, even with the deal he’s struck, and won’t be able to go back to basketball because of the gambling charge. He lets her know he isn’t the boyfriend she deserves. Naturally, Brianna is angry and thinks it's because he was “taking a stand.” Lt. Woods says taking a knee at the Anthem is not taking a stand, it's giving him, a police officer, "the middle finger.”

Brianna: I really appreciate everything you’ve done.
Woods: You're my daughter, sweetheart.
Brianna: I'm just so glad this is gonna be over. Jamal can finally get back to basketball and his career.
Woods: Uh, Brianna, there's something that you need to know. Um... Jamal is not going to be able to come back from this.
Brianna: What do you mean?
Woods: It's gambling. That's the one sin in sports that is never forgiven.
Brianna: But I just talked to him. They gave him a deal. They said if he just cooperated--
Woods: He might avoid jail time. He might. If he's lucky. It's time for you to stop worrying about Jamal and focus on yourself. On your life.
Brianna: Excuse me?
Woods: Jamal's path and your path are going in completely different directions. You are an extraordinary young woman, and one day you'll find a man who deserves you.
Brianna: And you don't think Jamal deserves me? Because he kneeled for the national anthem? Taking a stand bothers you that much.
Woods: Of course, it bothers me. I'm a cop. He was protesting me.
Brianna: No, he was protesting racism.
Woods: He was giving me the middle finger. Brianna... I have known you longer than you've known yourself. I know things about your heart you have yet to discover. Sweetheart, he's wrong for you.
Brianna: You mean because he comes from the wrong part of the city? Or has tattoos? Or he's the wrong kind of black?
Woods: There's more to it than just that. Brianna... Brianna! Brianna—

This episode was full of twists and turns which made it well done. Most shows would have concentrated on sympathizing with the social justice warriors at the rally and not on the organizer’s home life. The story about a black police family and how the different members of the family deal with the challenges of the job is unique in today’s entertainment world.