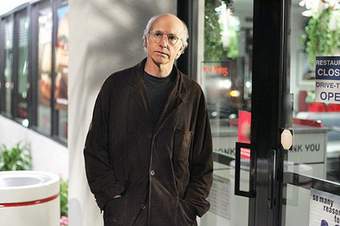 The October 8 episode of HBO’s Curb Your Enthusiasm, titled “The Pickle Gambit,” took a turn to the left during a sex scene, of all things. Known to insult just about anyone, Larry David took an over-the-top approach to satisfying his Muslim friend as she made sexual demands of him.

Shara Ghorbani (Anne Bedian) is a Muslim friend of Larry’s who he turns to for help with his fear that the Ayatollah is after him in retaliation for a play, Fatwa, about to hit the stage. Larry is the playwright and he’s losing sleep with fear.

Shara, it turns out, is a friend of the Iranian consul and Larry asks if she’d introduce the two in order for Larry to put in a request for help. The scene turns into the two of them in bed. Shara demands that Larry (who is Jewish) talk dirty to her. She then says for him to blaspheme her “like you blasphemed the Nation of Islam." Larry’s response is to start naming Republicans and Team Trump.

We won't show the NSFW scene here, but you can read the transcript of how explicit it was:

Shara: Fuck me, you godless fuck! You infidel fucking Jew!

Larry: I try to keep a kosher kitchen.

Shara: Yes! Talk dirty to me, Larry. Blaspheme to me like you blasphemed to the Nation of Islam!

Shara: Yeah, yeah! Rougher, Larry! Rougher! Sentence me to an orgasm like you've been sentenced to death!

I suppose a Republican Administration that is vocally pro-American and anti-Iranian dictator is a natural leap in this situation to the Hollywood left. Geez.

The Iranian consul does a video call with Larry and of course Larry messes it up after the man agrees to help him with the Ayatollah. In one funny bit, the consul admits he is a huge Larry David fan because of Seinfeld. After listing off a couple of his favorites episodes (the puffy shirt episode and the quiet talker one) he mentions that the Ayatollah is a quiet talker, too. That bit of nostalgia was funny. Nonetheless, Larry botches it as several people run through his house – including a teenager and a prostitute summoned to relieve his problem with masturbation – while Leon screams at the security guard to “just get the Muslims.” Oh boy.

So, Larry David and his cast of merry men and women are off to another no doubt successful season after a seven-year absence. His ability to offend is as strong as ever.