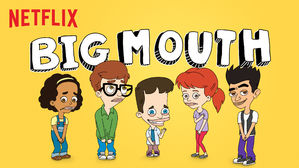 The ten-episode adult animated sitcom Big Mouth debuted September 29 on Netflix. Each half-hour episode addresses a part of young adolescent puberty and it is over the top in crude sexual talk and actions. The disturbing series promotes sexual activity in children who are in the seventh grade – we’re talking 12 and 13-year-old middle school students. As a bonus, liberal talking points are peppered throughout the series at random moments. There is no way this could be run on network or even cable television.

The supernatural is brought into the mix as the ghost of Duke Ellington lives in Nick’s house and disperses advice to the boys. Other ghosts contribute by delivering liberal talking points and criticisms. In episode three, titled “Am I Gay?”, the memory of beloved conservative Supreme Court Justice Antonin Scalia is sullied. Duke explains to Andrew, who thinks he is gay, that many dead famous guys were gay – Socrates, Freddie Mercury, and Justice Antonin Scalia. Andrew asks Scalia, “Weren’t you, like, famously anti-gay?” Scalia responds, “I was deep in the closet, and I wish I came out while I was alive. Ghost cock is like vegan bacon – it just isn’t as good as the real thing. And it has a weird texture.” Socrates says, “It’s the best time to be gay as long as you live on one of the coasts or Austin, Texas – that place is keeping it weird.”

Freddie Mercury launches into an ode to gayness and sings, “When you’re gay you’re loved everywhere except North Carolina.” He references bears, queens and Catholic teens, too. In the end Andrew comes to the conclusion that he is not gay, even though he masturbates to a movie starring Duane “The Rock” Johnson, after kissing Nick and then declares, “No one is 100% gay or straight. It’s a spectrum.” There we go – the pap that gender is fluid.

In episode two, titled “Everybody Bleeds,” one of several liberal talking points was a handicapped student in a wheelchair telling the others, “You know, I could walk until I was vaccinated,” as he was loaded onto the school bus. Jessi gets her period while on the class field trip to the Statue of Liberty. Wearing white shorts, she asks Andrew to find her something in the gift shop and he comes back with a towel commemorating 9/11/01. “Never forget," they say. Also, the Statue of Liberty tells Jessi that there is nothing good about being a woman, so that’s another lousy message. Jessi’s mother talks to her about feminine hygiene products but when Jessi asks about tampons, the mother says she has to “finish basic training before going to Fallujah, where we never should have been in the first place. Fucking Cheney.” Lovely.

Religion wasn’t spared in the mix, either. In episode 6, titled “Pillow Talk,” an Avant Garde artist proudly proclaims he once put a question mark after every sentence in the Bible. Later, in episode 7, titled “Requiem for a Wet Dream,” the Hormone Monster explains that life on earth began when an alien had sex with earth. “Sounds like Scientology,” says Andrew. The Monster replies, “Yep, they got the closest.” Celebrity Scientology believer Tom Cruise is credited with donating money for the school theatre and there is a Kirstie Alley Pre-Memorial Theatre plaque at a doorway - John Travolta was the inspiration for the previous year’s production. Lastly, in episode 9, titled “I survived Jessi’s Bat Mitzvah,” Cantor Dina is the lesbian who is having an affair with Jessi’s mother. Of course.

There were fun touches amid all the nastiness – several times a reference to a previous episode was brought into the following one and this included a character looking into the camera breaking the third wall and saying, “You’re binge-watching this, aren’t you?” LOL! The final scene acknowledges that this series would never make it anywhere else but Netflix. The Hormone Monster says, “Maybe one day you’ll look back on this time fondly. And perhaps even make something beautiful out of it.” Andrew replies, “What? Like a show about a bunch of kids masturbating?” Nick chimes in, “Isn’t that basically just like child pornography?” The Monster responds, “Holy shit. I hope not. I mean, maybe if it’s animated, we can get away with it.” Then he turns to the camera and says, “Right?”

All in all, it a tedious and disgusting way to spend time on Netflix. There is plenty to insult just about anyone on the conservative side of life. Animation does not make it any more palatable to watch. It’s all still pretty sick. I miss the days when a child could be a 12-year-old without pressure to be an adult.