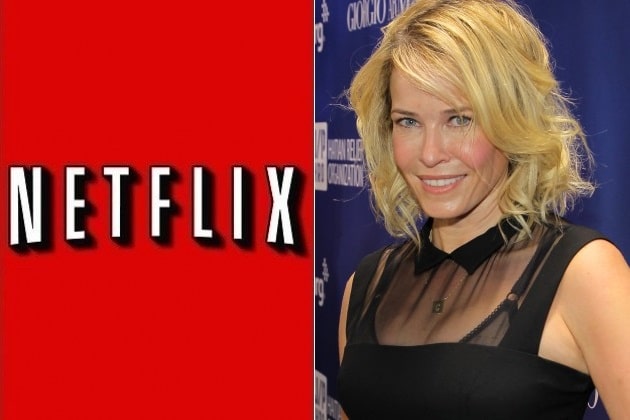 In the September 22nd episode of Netflix’s Chelsea titled “Game Changers,” leftist "comedienne" Chelsea Handler spent the “Apology Time” segment of her show apologizing to America on behalf of the Emmys for "normalizing" former White House Press Secretary Sean Spicer who she calls, "a willing mouthpiece for a lying bucket of dicks." Classy.

Handler said of Spicer’s Emmy show appearance, “We’re sorry for ignoring the fact that he spent the last six months deceiving the American people, discrediting the media and undermining our democracy as a willing mouthpiece for a lying bucket of dicks. But in our defense, it was either that or give a lifetime achievement award to Bill Cosby.” That’s right. Handler called President Trump “a lying bucket of dicks” and then compared Spicer to Cosby, a man on trial for raping and drugging women.

She also apologized for the GOP trying to pass the Graham-Cassidy bill on health insurance reform:

Chelsea: I’d like to apologize on behalf of the GOP. We’re sorry that, despite our four failed attempts this summer, we’re trying yet again to repeal Obamacare. It’s like our healthcare bill won’t die. Probably because it has Obamacare. We’re also sorry we’re willing to allow millions of Americans to die without health coverage just so we can erase any proof that a black man was ever president.

How’s that for logic? She claims “millions” will die, yet each week Americans are told that more insurers are leaving markets and those using Obamacare subsidies are left without any real options for doctors or hospitals to serve them. And, of course, Handler used the usual racism charge when talking about Republicans. She truly sounds like most shallow thinking leftists who make political policy disagreements into personal, ugly attacks, because she is.

Earlier in the show, Handler essentially handed a Democrat challenging Speaker of the House Paul Ryan in the Wisconsin primary race free advertisement. Randy Bryce was brought on the show at the urging of Handler’s best pal, Mary McCormack. McCormack told her, “We’ve got to get him elected.”

An iron worker, Bryce sat next to former Obama Deputy Chief of Staff Alyssa Mastromonaco, a recurring guest (as is McCormack). Mastromonaco spouted the usual talking points in opposition to Ryan and Republicans as she intoned, “It’s a dark time.”

An unintentionally hilarious line was delivered by Handler as a question to Mastromonaco, though Handler was being completely serious: “You guys weren’t corrupt and profligate, do you think?” The Obama Administration wasn’t corrupt?! LOL!

Also, Mastromonaco said, “Obamacare has never had a higher approval rating than it does now,” and complained that the process for the Republican bill hasn’t been in regular order, with no CBO scoring. Somehow the fact that Nancy Pelosi said, when pushing Obamacare, “We have to pass the bill before we know what’s in it.” Also, CBO’s scoring has been off on Obamacare from the beginning. But, whatever.

Chelsea Handler continues to provide a crass show that is only of interest to Democrats and leftists satisfied with immaturely bashing President Trump and Republicans. Any pretense of her having enough curiosity to listen to opposing points of view, never mind provide any comedy, has long gone. That seems to be enough for her audience. How sad.