Comedy Central's ‘Broad City’ Lusts for 'Throuple' with Michelle and Barack Obama, Gets Run Over by Trump Bus

Season Four of Comedy Central’s Broad City opened with an episode titled “Sliding Doors” on September 13th. Themes from last season randomly pop into this flashback-style episode through the eyes of both characters, Abbi Abrams (Abbi Jacobson) and Ilana Wexler (Ilana Glazer) as they relive the day they first met, with a twist.

Then the subject of throuples brought about a chance for the two women to fangirl over the Obamas. Abbi asks Ilana who she would choose for a throuple and Ilana replies Michelle and Barack Obama. Abbi swoons over the answer and agrees because they are a “hot couple” and “leaders of the free world.” Wait. When did the First Lady’s leadership rise to that importance? Abbi says, “I mean, I feel like we’re finally moving forward.” And the clincher – Ilana says,“Next is a woman.” Lol!

Abbi: That's what a throuple is.

Ilana: Thank you so much!

Abbi: Yeah. Okay, okay, if you had to be a throuple with any current couple, who would you pick?

Abbi: Yes, they are so hot as a couple and as the leaders of the free world. I mean, I am so relieved that we have a hot black guy as president.

Ilana: I mean, I feel like we're finally moving forward.

Abbi: And it's just the beginning. I mean, never backwards. Only forwards!

Ilana: Next is a woman.

The women visit a psychic who tells them that they will die that day. In a metaphor-like sequence, Ilana is smoking pot on a park bench and a siren is heard in the background. In a moment of paranoia, she jumps up and demands Abbi run away from the area with her. They run into the street – right into a city bus. On the side of the bus is an advertisement promoting Trump’s show at the time, The Apprentice, complete with a big picture of him saying, "You're fired!" Even that is only mildly amusing. 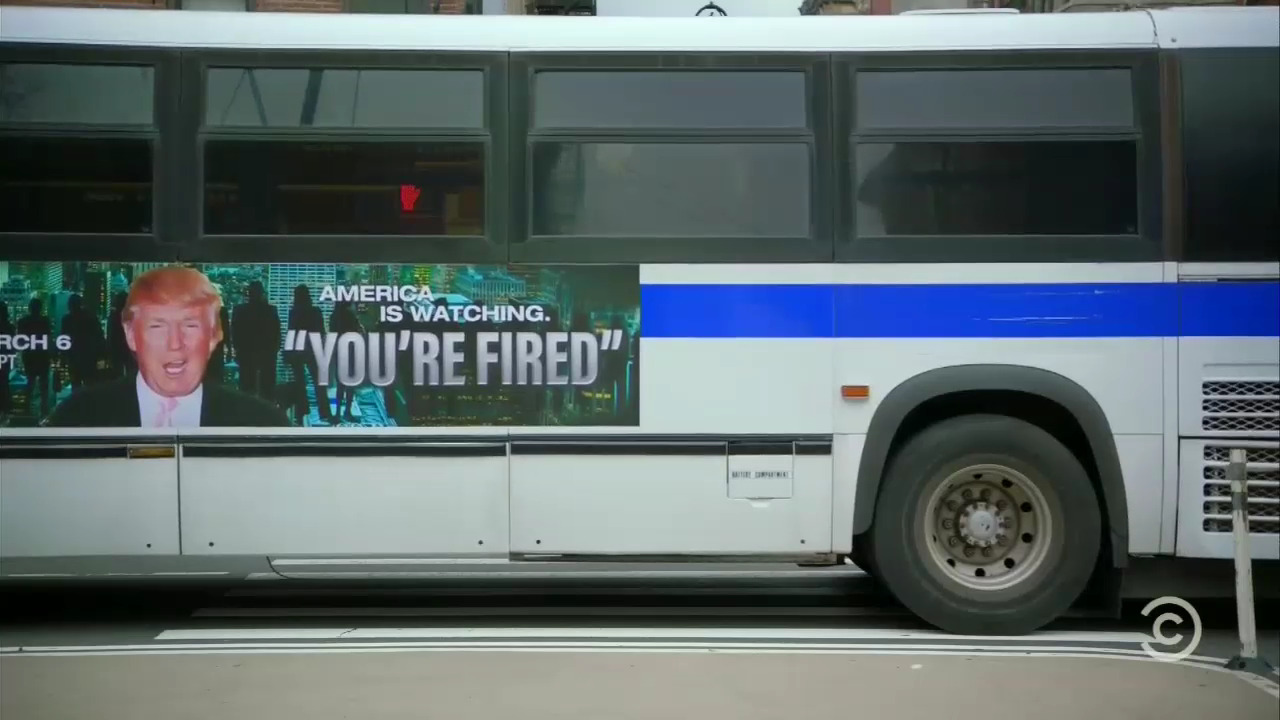 The series, co-created by Glazer and Jacobson had to be re-written after President Trump won the 2016 election because these two liberals just assumed that Hillary Clinton would be the next president. Season Three even featured a walk-on bit by Hillary as they tried to boost her appeal with millennials.

The show isn’t funny or clever. No doubt this new season will be all about Trump bashing since he did, in fact, run them over on election night. There sure isn’t much inspiration coming for these two young women.