The season finale of VH1’s Daytime Divas goes ugly against the token conservative host and her right to lawfully carry a concealed weapon. In the July 31 episode titled “Whose Show Is It Anyway?” the hosts of “The Lunch Hour” discover that Heather (Fiona Gubelmann) conceal carries a gun in her purse. The predictable liberal angst over an American constitutional right ensues.

The gun has a pink handle – naturally – and a name, Fancy. Thankfully, Heather speaks up for herself and pushes back on their “very liberal and left-minded opinions.” Heather points out, too, that there are no signs posted claiming the studio is a gun-free zone. The argument among the ladies continues as the show begins.

Heather: I bring the gun every day, ladies, and it’s fine.

Mo: Hell, no, Annie Oakley. What the hell are you doing with a gun?

Kibby: Yeah, Heather! Are you freakin' insane? Guns are scary.

Maxine: There is no reason for anyone to bring a weapon to work.

Nina: I agree. I was the one who was threatened.

Heather: With a selfie stick.

Nina: The point being I would never bring a gun to work.

Heather: Hey, ladies, while I respect your very liberal and left-minded opinions about this matter may I remind you that I am well within my rights to carry a firearm? Besides...

Maxine: And it's pink.

Heather: I don't see what the big fuss is. I carry my gun safe and sound in my purse... Inside of my drawer... ...Which I lock. No big deal.

Mo: No big deal, my ass. Heather, a gun is not costume jewelry. Do you know how many black people die from guns?

Heather: Ladies, I am protected by the Second Amendment which gives me the right to bear arms--

Mo: Every man is—

Maxine: Ladies, enough! This is not the time nor place to have this discussion. We will continue a civilized discussion where it belongs.

Heather: The law is very clear, as a citizen of New York and a lawful holder of a concealed weapons permit I'm allowed to carry my gun wherever I want as long as there are no signs prohibiting it. Look around, ladies, there are no signs.

Maxine: No one thought we needed a no-gun sign plastered on the set of a daytime talk show for women.

Mo: She has a point.

Heather: Fancy's what I have named my gun.

Kibby: But it's a gun, not a Pomeranian. My aunt had a Pomeranian named Fancy. Cute, but annoying. Didn't know how to feel when they put her down.

Nina: Heather, the argument that you and your NRA friends make that guns deter violence is absolutely ridiculous. Guns are almost never used in self-defense. And when they are, they always result in a more dire outcome.

Mo: No, I don't, I don't know. Nina, look. I actually think people have the right to strap up.

Mo: But not your crazy ass. You think I trust you with a weapon? You can barely use a can opener without hurting yourself, Heather. Come on, stop it.

Maxine: You know, let's check in with our social media to see what they say about this topic.

Heather: Ooh. Please, take your fantasies somewhere else, creepers. Yeah, I'm a responsible gun owner and I carry it everywhere I go.

Kibby: Keep that in mind next time you try to cut in front of her at communion. 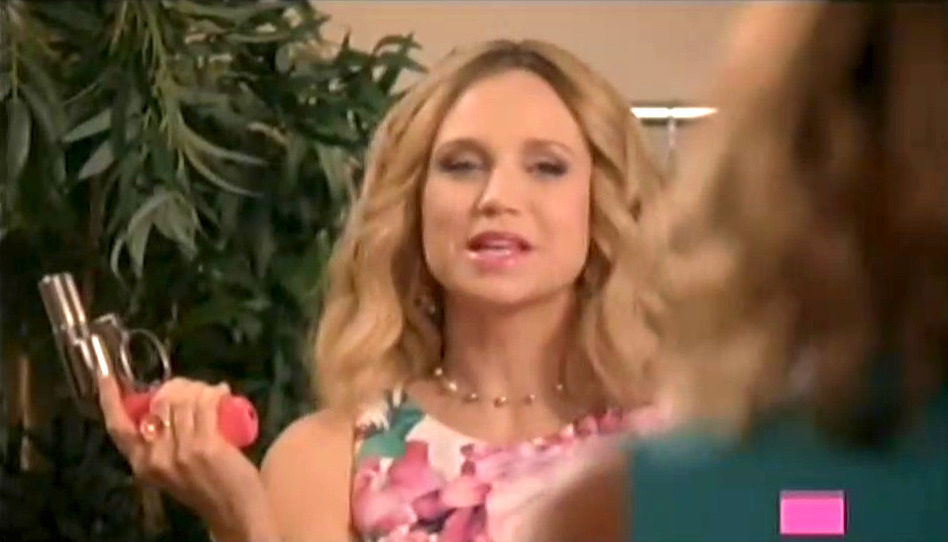 So, in that hot mess of a conversation, many of the standard tropes of anti-gun liberals make an appearance: guns are scary, the NRA is evil, guns don't deter violence, and guns “are almost never used in self-defense” and the results are "always" dire. Clearly, Nina has been brushing up on her gun control talking points. It is a pleasant surprise when Mo steps up and agrees with Heather’s right to carry a gun, though.

Later in the show, Kibby takes Heather’s gun and points it at a guest of the show – a co-star from a hit show back in the day when Kibby was a child star. The adult actor plied her with drugs and acted inappropriately with her and other young female actors so Kibby is upset to learn her kid sister is cast in a new sitcom with him. Trying to protect her sister, Kibby aims the gun at him and Ramona (Sarah Mack), a production assistant, tackles Kibby to the ground. The gun goes off, of course, and shoots Mo’s new handbag and also Jason Abel (Adam J. Harrington), the network president. Jason gets grazed by the bullet as it hits his butt. In the end, “No guns” signs are placed around the studio.

Anti-gun liberals miss the irony in even silly television scripts. If Kibby had been educated about gun safety instead of on her high horse trying to deny Heather her Second Amendment right to carry that gun, the handbag and the network president would have been spared injury. How many innocent people could have been saved if guns were legally allowed in more public places?