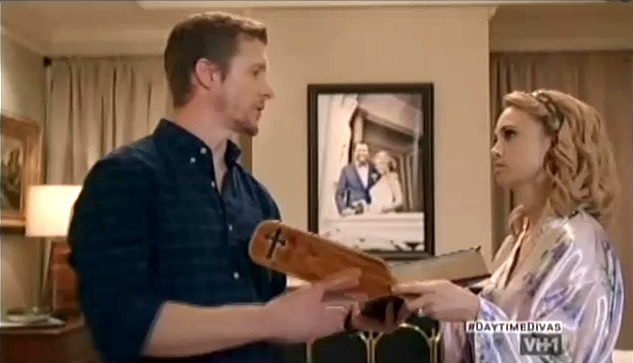 The June 12th episode of VH-1’s Daytime Divas, titled “Coma Bump,” took a perverse twist with a storyline about the Christian host, Heather, and her husband, Andrew. As noted in last week’s pilot episode, the character is portrayed as a less than perfect Christian, but the writers took it to a whole new level this week.

One of the other hosts noticed a bruise on Heather’s (Fiona Gubelmann) leg and asked if Brad (Rich McDonald) was hurting her. She said no and the conversation quickly ended. The viewer is left with the impression that this is a case of an abusive husband. But no. Later in the episode, Maxine (Vanessa Williams) notices what she thinks is a cross tattoo, but, in fact, it is a bruise with the impression of a cross on it. This is later explained by a scene where Brad paddles Heather’s behind while she reads a passage from the Bible. The paddle has a cross shape carved into it. It’s not domestic abuse – it’s S&M! How twisted is that?

Child: Can I get a little blush mommy?
Heather: Honey, no. It'll clog your pores this late at night.
Brad: Do you hear yourself? It'll clog your pores? - No wonder he's-- -
Heather: Shut up, Brad!
Brad: Is that really how you're talking' to me right now?
Heather: Yes, Brad. It is how I'm gonna talk to you right now.
Brad: Averline. - Cartoons.
Averline: You sure about that? It's so late and the children need to be in the bed.
Heather: Cartoons, Averline. Get the book.
Brad: Ephesians 5:22.
Heather: "Wives, submit to your own husband... ...As to the Lord. "For the husband is...
...For the husband is the head of the wife."

I suppose it's better than the typical angry, abusive Christian husband trope, but still!

Another interesting part happened later with some celebrity name dropping as head host Maxine is encouraged to come back to the show after awakening from her coma. Her son, Shawn (McKinley Freeman) reads off some potential celebrity replacement hosts for the show, including Caitlyn Jenner ("a woman with male privilege") and Ann Coulter (not a woman at all). The final straw that catches Maxine’s attention is the mention of Michelle Obama. Maxine immediately stops exercising and rushes to the set.