'Stranger Things' Actor Vows 'We Will Punch Some People in the Face!' to Wild Applause 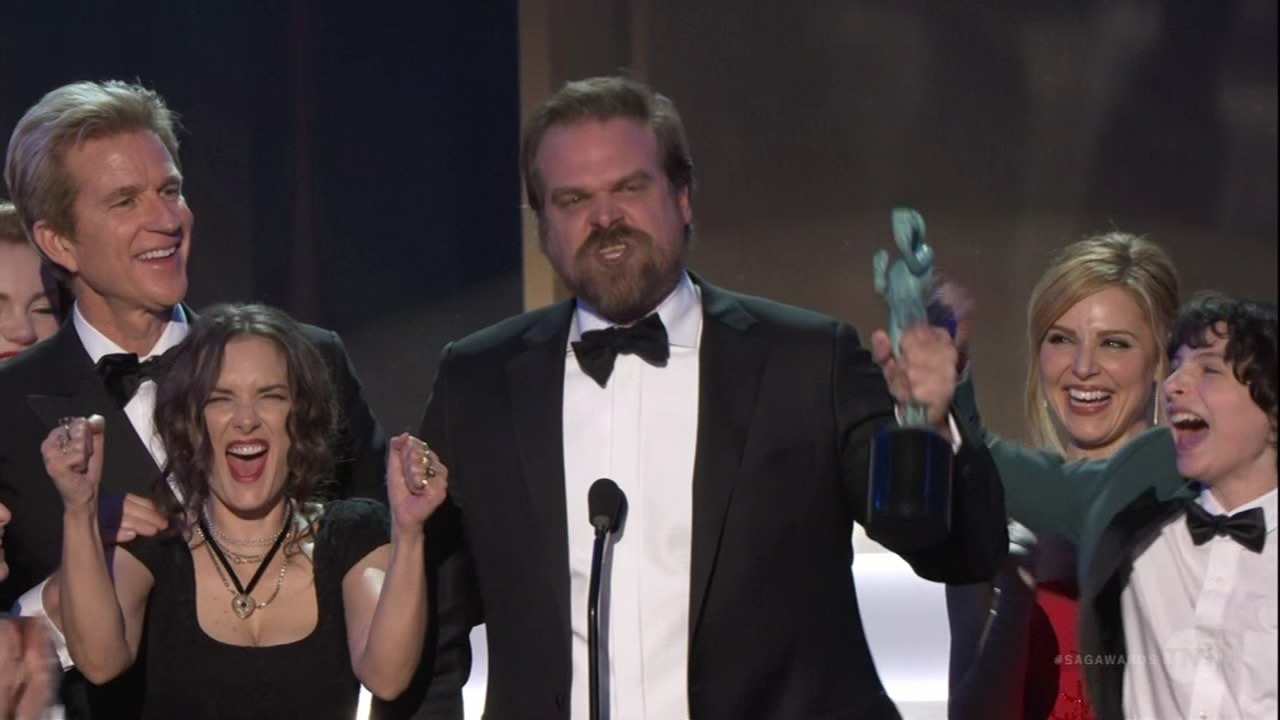 During the 23rd Annual Screen Actors Guild Awards on TBS Sunday night, a strange call to violence was issued by actor David Harbour as he accepted the award for Best Ensemble in a Drama Series for Stranger Things. Mind you, the stars of this Netflix series are children.

He began by calling on his fellow actors to “cultivate a more empathetic and understanding society,” but ended with a screaming call to “punch some people in the face” with “soul, heart, and joy.”

As the rant screeched on, the audience loudly cheered him on – fists pumping in the air and jumping to their feet – but it was the line about punching people in the face that made the rabid crowd roar so loud that part of his speech was inaudible.

And I would like to say that in light of all that's going on in the world today, it's difficult to celebrate the already celebrated "Stranger Things." But this award from you who take your craft seriously and earnestly believe like me that great acting can change the world, is a call to arms from our fellow craftsmen and women to go deeper and through our art battle against fear, self-centeredness, exclusivity of our predominantly narcissistic culture and through our craft to cultivate a more empathetic and understanding society by revealing intimate truths that serve as a forceful reminder to folks that when they feel broken and afraid and tired, they are not alone.

We are united and that we are all human beings and we are all together on this horrible, painful, joyous, exciting and mysterious ride that is being alive. As we act and the continuing narrative of "Stranger Things," we 1983 Midwesterners will repel bullies. We will shelter freaks and outcasts, those who have no hope. We will get past the lies. We will hunt monsters, and when we are at a loss amidst the hypocrisy and casual violence of certain individuals and institutions. We will, as per Chief Jim Hopper, punch some people in the face when they seek to destroy the [inaudible] and the disenfranchised and the marginalized. And we will do it all with soul, with heart, and with joy. We thank you for this responsibility. Thank you.

That’s right. Leftist Hollywood that normally preaches tolerance and says “love wins” is now cheering on the guy telling them to get violent. What alternate universe is this?

Don’t worry – it’s just “some” people that will have to have their faces punched. I think we all know that would be flyover country, the people who voted differently than Hollywood elites in the last election. Heckuva message for children, right?