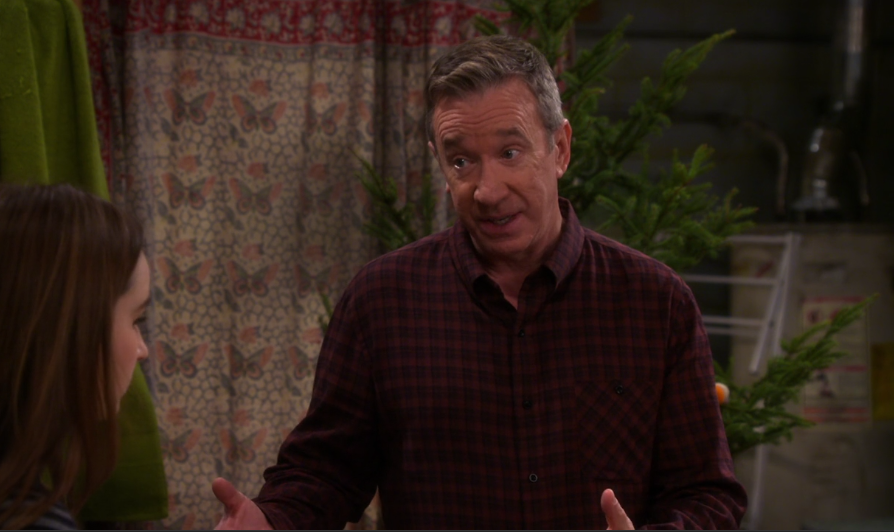 In Friday’s episode of ABC’s Last Man Standing, Baxter daughter Eve (Kaitlyn Dever) introduces her new boyfriend, Rob, to her parents. During a conversation with Mike (Tim Allen) before brunch, twenty-year-old Travis admits to Mike that he is a recovering alcoholic. Yikes! The guy isn’t even old enough to legally drink.

Mike and his wife Vanessa are impressed with Rob, who is a church-going Republican but Mike is worried about Rob’s confession of his nine-month-old recovery, as any parent would be. Talking to Eve about it, he learns that she didn’t know Rob told Mike. Later, after Vanessa tells him that Eve and Rob broke up, he asks Eve if the break-up was because of Mike knowing the truth about Rob.

Eve then admits she and Rob didn’t really break-up, that she was lying about that to spare her parents worrying about her. She says, “He’s an alcoholic and a Raiders fan. If he becomes a Democrat he’ll become the Mike Baxter trinity of evil.” Mike responds, “He’s not going to become a Democrat now that he quit drinking.” Did you hear a rim shot, too?

The touchy subject of a young man’s recovery from addiction was handled well in this episode. Tim Allen has his own history in this area and that no doubt added to the writing of this show.