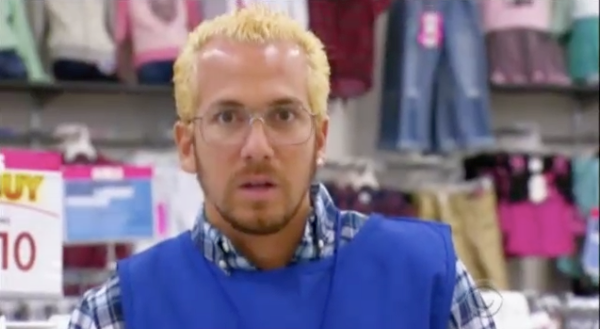 In the latest episode of the CBS reality show Undercover Boss, “Shoppers World,” we meet Sam Dushey, President and CEO of Shoppers World, described as “one of the nation’s fastest growing retailers of discount apparel and merchandise.” A family-owned and operated discount retailer, Sam is the last family member in the business.

In 1904, Sam Dushey’s grandfather immigrated to America from Syria in search of a better life. He opened the first store in the 1930’s. In the wake of the national economic collapse in 2008, Sam took over distressed retail store leases, thus increasing the chain. His goal is to reach 500 stores. He notes that his grandfather strived to survive while he strives to be successful. (Also from today’s headlines – he lives in Trump Tower in Manhattan.)

Disguised as a surfer dude from the Jersey shore named “Alex,” Sam goes undercover to see his stores from the point of view of the people who work there. The cover story is that “Alex” is a reality show contestant looking to win money. He checks on four stores – Jamaica Avenue in Queens, NY; Morrow, Georgia (Atlanta area); Cleveland, Ohio; and Pitkin Avenue in Brooklyn – one of the original stores.

There Sam finds cheerful, hard working employees amidst over-purchasing buyers bringing in too much inventory for the space available, training manuals not being used while employees are left to train themselves, and a lack of security. He hears numerous personal stories from the employees themselves as well.

For the first time ever on Undercover Boss, an actual theft occurs during the filming of this episode. The security is non-existent in the Cleveland store and an employee tells Sam that theft happens once or twice every day. The manager is concerned for the safety of the employees.

Carol: Somebody stole something. Unfortunately, they were too late to get to the door.

Carol: It's too late.

Sam:  I-I-I'm in total shock. It's like every time I walk into a store, I never know what I'm gonna find.

In the end, Sam realizes, in the pursuit of creating a mega-chain store empire, the values and ethics of his grandfather and father have been lost. When the chain consisted of seven or eight stores, the employees were treated as family and felt respected. He says he wants that feeling to return before he expands further.

Proving that CEOs are decent people – despite what the liberal, socialist media and Democrat candidates tell us – Sam, touched by the stories of personal trials and tribulations from his employees, gives them all checks to help out their situations and rewards the Cleveland employees – all of them – with $5,000 checks and over a million dollars worth of security measures for the store.

The American Dream lives. Granddad would be proud.