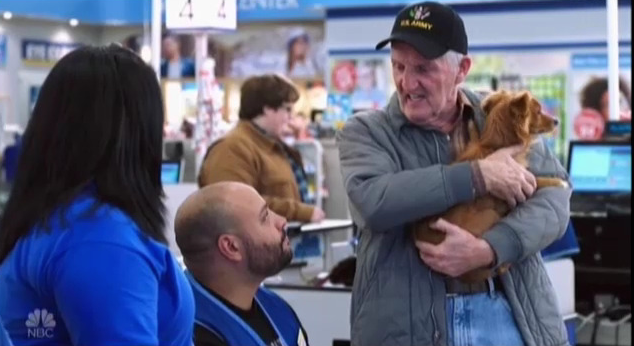 From abortions to guns, we’ve seen time after time the bogus liberal propaganda NBC’s Superstore aims to deliver. Not straying from the leftist agenda, veterans are now targeted as going crazy.

On Thursday’s episode, it’s announced that the store will have an "integrity award" and Cloud 9 employees can vote for who they think best exemplifies this quality. Conservative store Manager Glenn attempts to get the award, by any means necessary.

He goes too far when store employee Garrett saves a dog, later found to be owned by a veteran, and is commended by corporate for his good deed. Filled with jealousy, Glenn tries belittling Garrett’s deed, going so far as to say the veteran may have “shot up a village.”

Corporate: So all of us at corporate would like to congratulate you on some find work today. Really impressive.
Garrett: Ah, just doing what I do. Plus, my manager, Glenn Sturgis, set such a great example for me.
Corporate: Right, but you're the one who saved the life of a war hero's dog. I mean, that deserves recognition.
Glenn: Well, hold on. I think you mean allegedly saved a life of an alleged dog.
Garrett: It was definitely a dog.
Glenn: And who knows if that guy was even a real war hero. Maybe he was one of those veterans that, you know, shot up a village of innocent people. Lot of folks snap under the fog of war.
Garrett: What are you doing?
Corporate: Um, well...I'm not sure how—
Glenn: Garrett just called you a bad name, and now he's giving you the finger.

Truly disgusting to say about a war hero. Clearly, we can see Hollywood suggesting veterans go crazy under the pressures of war.

Just another anti-military rant. When will it cease?