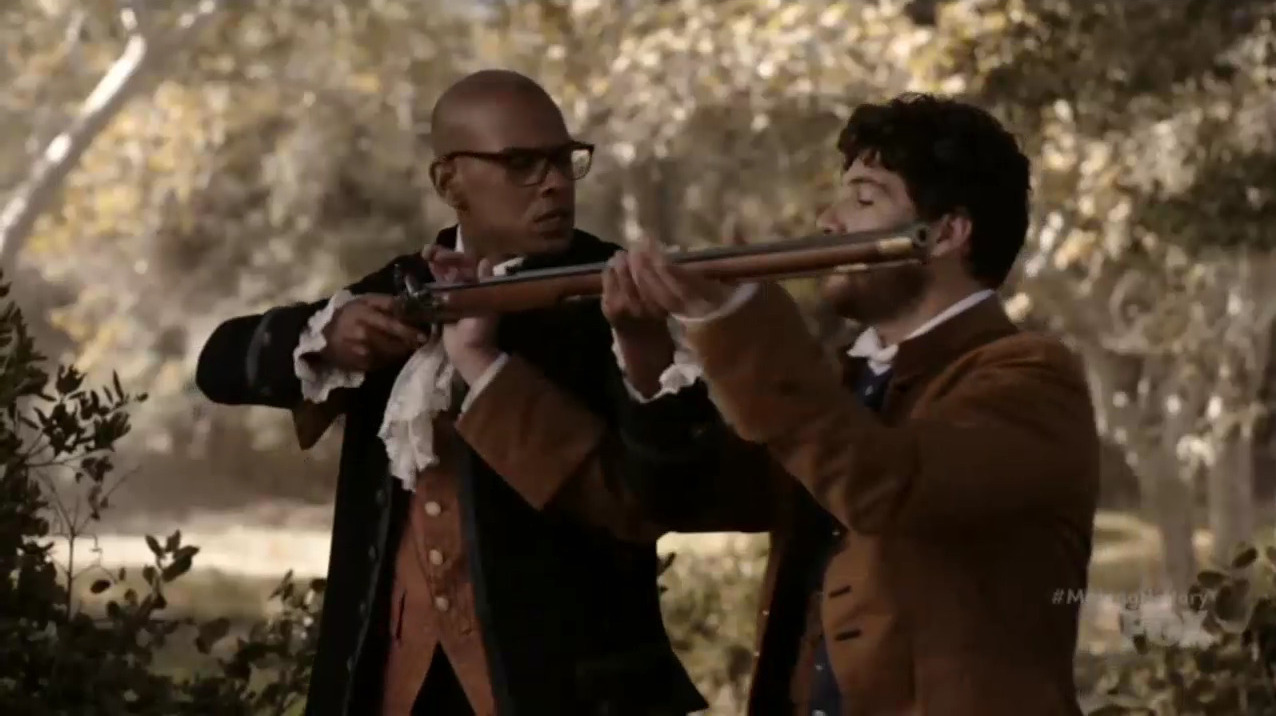 The topic of gun control is certainly a controversial one in the news today, but the fact remains our right to bear arms is upheld by the Second Amendment. FOX’s Making History demonstrated just how strongly the Founding Fathers loved their “gunnys” and refused to hand them to the British.

On Sunday’s episode, “The Shot Heard Round the World,” Chris and Dan are trying to get the colonists to revolt against the British. Chris decides to deliver a speech about how the British want to take away their guns, causing quite a stir amongst the men.

Chris: Guys, listen! Okay, we have to do this now, all right? We're all here and nobody looks busy.
Hancock: Don't be nasty, Chris.
Chris: I'm trying to help. The British are gonna find your hidden cannons.
Adams: They know about our cannons?
Chris: Yes! They're gonna take all of your weapons.
Revere: They're coming for our guns?
Man: What?
Chris: Oh, my God, this is America. Yes. Yes! The British are coming to take your guns.
Revere: I will die for my right to kill others while defending myself.
Hancock: If they take our guns, then how are we supposed to fight the people who would take our guns?!
Adams: My gun! Mine! My gun! Oh, gunny, gunny, gunny. They'll never get you. Mwah.
Revere: The committee be damned. We shall revolt.  Finally, these American colonies will truly be free!

It's apparent the writers are overplaying the affinity the colonists had for their guns - not just for their protection and survival needs.

Later, Chris and Dan purposefully get captured by the British to convince them to take away guns from the colonists. Lieutenant Colonel Francis Smith and soldier Davey discuss the sheer number of guns and how they can best control them.

Smith: Guns. How many guns?
Dan/Chris: Like a thousand. Like a million.
Smith: Oh, my God. What is their obsession with guns?
Chris: They say they're for self-defense.
Davey: All right, but if that's true, then why have so many? It makes me think they intend to use them against us.
Smith: I've heard claims they're for hunting. Bows and arrows are for hunting. A musket fires a bullet a minute. It's a mass-killing machine!
Davey: Well, perhaps between wanting a gun and purchasing a gun there could be some... Period of waiting.
Smith: I don't want to take their guns! But having so many makes me feel like I need to take them away!

The writers portray the British as intelligent men who think by today’s standards of gun control in terms of use and quantity, while making the American colonists seem like simple-minded stooges who just love their guns. Not very patriotic, but that’s Hollywood for ya!