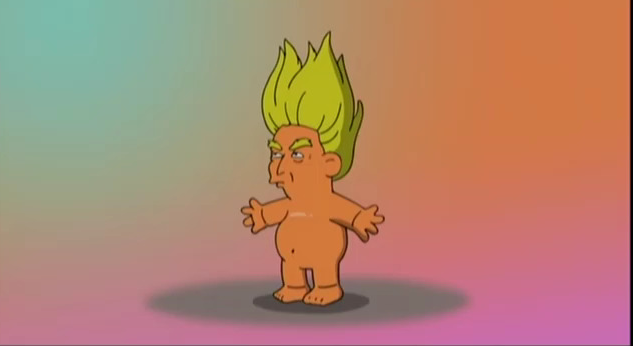 Without question, Donald Trump has been portrayed on virtually every media outlet for the past two years, mostly in bad taste. The trend continues on FOX’s The Simpsons.

On Sunday’s episode, “The Cad in the Hat,” Lisa gets a new hat and has a daydream where Donald Trump is on his phone, presumably tweeting, and quite literally gets “trolled” - he is transformed into a troll doll.

Later, Bart discreetly tosses Lisa's hat into a junk yard, causing her grief. He gives her presents to make her feel better. One gift is The Poems of Emily Dickinson read by Elizabeth Warren. No surprise there, as we’ve seen before, this show loves the liberal Massachusetts Senator.

Bart decides to get her hat back and goes to the junkyard where he left it. He finds the hat crushed inside a car. As retrieving it seems hopeless, he states, “I never thought I'd sink this low, but I need help from God.” He enlists the help of two young boys who pray over the car, causing it to levitate. One boy comments about the miracle stating, “Jesus is performing them through us.” Nothing but mocking of Christianity, again.

It’s quite clear that conservatism take a back seat to FOX’s liberal priorities. Can’t say it’s surprising. The right always seems to be the target of Hollywood’s wrath.