Nixon Bashed, Compared to Mussolini on NBC’s ‘The Good Place’ 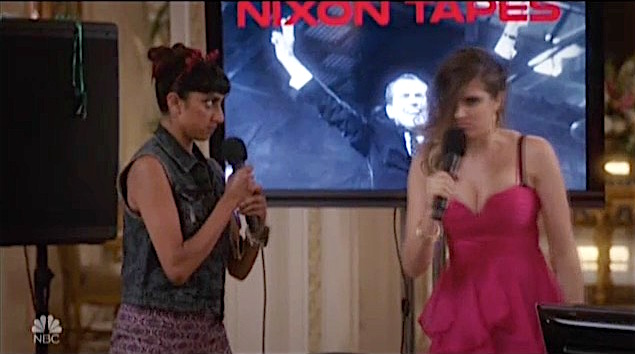 NBC’s The Good Place aired the episode “…Someone Like Me as a Member” Thursday and put President Richard Nixon's infamous tapes in the same category with dictator Benito Mussolini's fascist speeches.

The "Good Place” gets some visitors from the “Bad Place,” as Eleanor (Kristen Bell) is supposed to leave since she ended up in the Good Place by mistake.

Some of the Bad Place’s delinquents throw a party and decide to have fun with a version of karaoke that involves lip-syncing to evil speeches. When Mussolini and Nixon both end up as categories, they choose the latter.

[In Nixon's voice] - "What you always have to "Remember about the Irish is they get mean. Virtually every Irish I've known gets mean when he drinks."

It’s rather despicable that a past U.S. President would be compared to such a putrid man as Mussolini. NBC really should know their audience. Oh wait, they do.

Funny how a Democrat wasn’t mocked. Nope. They go for the easy target.

Let’s face it, the Nixon jokes just don’t cut it anymore. Watergate was nothing compared to Hillary Clinton’s emails, but they’ll never admit that.