On July 21, a Demi Lovato fan account leaked a picture of Katy Perry, Ariana Grande, and Demi Lovato with Democratic candidate Kamala Harris. Another picture was posted a day later on Harris’s Instagram account. The pictures showed the pop star trio joyfully wrapping their arms around the lefty presidential hopeful at a campaign fundraising event (strikingly similar to a picture of Jay Z and Beyonce at a Hillary Clinton event). Though the three stars seemed enthusiastic, none of them made a peep about the event on their social media accounts. 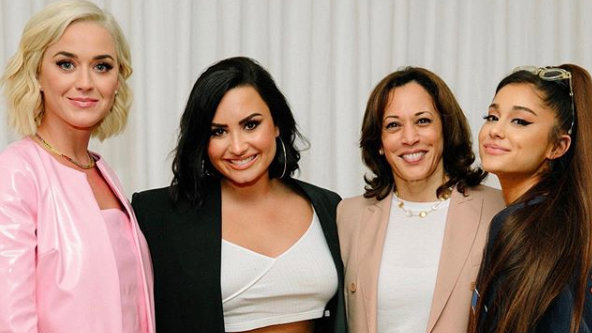 The invitation for the event advertised a fireside chat with Harris at the Los Angeles home of record label owner Scooter Braun on July 20th. A Daily Mail report revealed that more than 100 people attended the event in Braun’s $20 million compound. After the event, Braun tweeted, “a truly inspiring night with my friend @KamalaHarris.”

Perry, Grande, and Lovato combined boast 317.1 million followers and 5,573 posts on Instagram alone, so their social media silence is rather uncharacteristic. But the reason for the secrecy has less to do with Harris’s far-left politics (we can be sure they’re fans) and much more with petty drama.

#WeStandWithTaylor immediately began to trend on Twitter. Swift was supported by former rival Katy Perry -- who commented “I stand with Taylor. Stay strong my friend” on a petition to re-release Swift’s six albums. Demi Lovato defended her former manager, insisting that Braun was a “good man.” Ariana Grande stayed silent, refusing to take a stance for or against her manager.

Swifties quickly attacked Harris for hosting her event at Braun’s mansion. One tweeted:

I was SO excited for you as a democratic candidate, but if you so choose to go to an event held by @scooterbraun, a man whose arrogance mirrors our president’s, I can no long [sic] hold onto my excitement and faith for you as a presidential candidate, @KamalaHarris #disappointed

Given the frightening zeal of Taylor Swift fans, it’s no wonder that the stars wanted to keep their attendance under wraps.

Good to know the “low-information voters” are still out there.