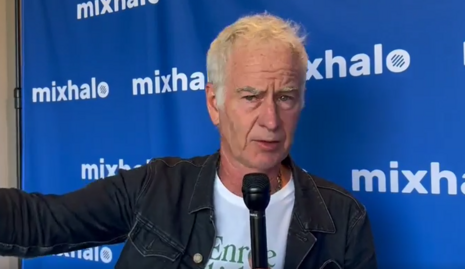 Novak Djokovic is in a bit of an odd situation.

Currently, the defending Wimbledon champion is being denied the opportunity to play in the U.S. Open due to his vaccination status, despite the fact that the tournament itself has no rules on vaccination status for participants. The U.S. is still holding onto its delusion that foreigners who are not vaccinated should not be allowed into the country.

American tennis legend John McEnroe thinks that this whole situation is nonsensical. Speaking at an LAFC game, he stated that vaccination is the decision of the individual and that any national-level bans on unvaccinated individuals is unnecessary.

“I think it's B.S.,” McEnroe said. “I think he should be allowed to play. That’s up to the individual. He’s perfectly entitled to make that decision.”

The all-time great further said that a world-class athlete like Djokovic is incredibly particular about what he puts in his body and that he is in peak health, which should render his vaccination status as irrelevant.

“It’s frustrating to see at this point … he’s not allowed into the country because he’s not vaccinated,” McEnroe said. “That’s the rules that we have right now, I don’t agree with it.”

You’re not the only one who feels that way, McEnroe.