Something confusing is brewing in Oklahoma Sooners football. 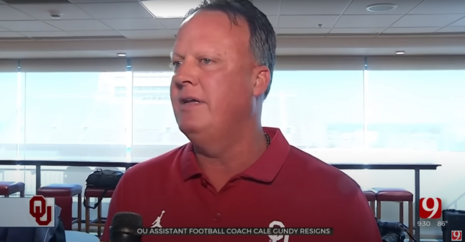 Cale Gundy, an assistant coach with the Sooners program since the 1998 season, resigned unexpectedly on Monday. In addition to being involved in coaching for nearly three decades, Gundy was a standout quarterback for the Crimson and Cream and was one of the first highly accomplished quarterbacks for the Sooners.

His resignation is not because he was involved in a sex scandal, or becasue he was embezzling funds, or helping in some elaborate, illegal recruiting process. No, he left the program because he did the unthinkable: he said an unspecified “shameful and hurtful” unknown word during a film session.

Yes, a coach with one of the strongest legacies at any one program in the country left his role because he said an offensive word.

Here’s where it gets laughable and confusing. According to Gundy, during a film session last Friday, one player seemed to be not paying attention to what the team was working on. As a result, Gundy read what this player had been writing on his iPad to make an example of him. What was on the screen contained this “offensive” word in question, which has not been specified in any of the reports on the incident.

Notice that he says the words were not his own, he simply reread them out loud.

However, Sooners head coach Brent Venables said in a statement regarding Gundy’s resignation that his assistant repeated the word several times.

Now obviously, shaming one player and singling him out for not paying attention might not be the wisest move, nor would reading whatever this word was out loud.

But to let go of a guy that for nearly thirty years has helped mold one of the most prestigious college football programs in the country for one less than impressive moment of weakness is absurd. Any mature adults in the room (which should be most of the people there) should be willing to offer this man forgiveness and a second chance.

But if that’s not the way you will play this game, then the player who originally wrote the offensive word should be cut from the team immediately as well -- which, as of right now, he isn’t.

Whatever Venables thinks, most players on the Sooners didn’t want Gundy to resign, according to several reports.

Talked to a few current players about the situation earlier today. Seemed like the team had talked through it and the vast majority wanted Cale Gundy to stay. But ultimately…Cale did what he thought was best for the program.

So not only did Venables and the higher-ups in the program let go of an incredible asset to their program, they may have lost the support of the locker room and hampered its unity for the season.

All because of distasteful word.