Los Angeles Dodgers broadcaster Vin Scully was rightly regarded as the most iconic broadcasting voice in MLB history, and he was on air for some of the most iconic moments in baseball history. 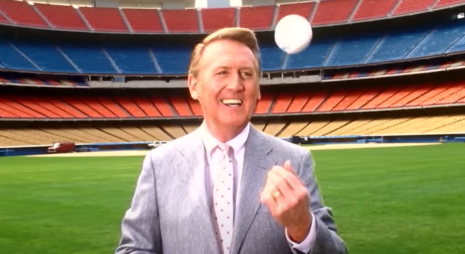 But he wasn’t just a supremely gifted on-air personality. He was an unashamed American patriot who loved his country and wasn’t afraid to call out the ceaseless nonsense that is everywhere in our country.

In 2017, back when kneeling before games first became a fad in the NFL, Scully did not shy away from lambasting the practice as a sign of disrespect for America and its military.

Speaking at an event called An Evening with Vin Scully at the pasadena Civic Auditorium, Scully was posed a question regarding his thoughts about the kneeling that was rampant in the NFL

His response was as clear, eloquent, and descriptive as his numerous play-by-play calls.

I have only one personal thought, really. And I am so disappointed,” Scully said. “I used to love, during the fall and winter, to watch the NFL on Sunday. And it’s not that I’m some great patriot. I was in the Navy for a year. Didn’t go anywhere. Didn’t do anything. But I have overwhelming respect and admiration for anyone who puts on a uniform and goes to war. So the only thing I can do in my little way is not to preach. I will never watch another NFL game.

Even though Scully is no longer with us, his strong sense of patriotism in an age when a love for homeland is frowned upon is something we should emulate. Our country, while highly imperfect and in constant turnover, is one worth loving, celebrating, and honoring regardless of woke progressives will try to tell you.

And by the way, it wasn't the first time Scully called -- and called out -- anti-Americanism: