In the wake of FINA (International Swimming Federation) announcing a ban on transgender females from elite swimming competitions, the International Rugby League (IRL) has made a similar decision that will protect the future of women’s rugby. 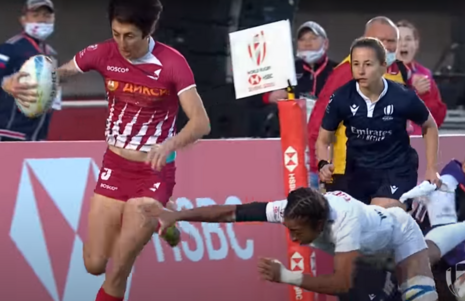 “The IRL reaffirms its belief that rugby league is a game for all and that anyone and everyone can play our sport,” the league said in a statement. “It is the IRL’s responsibility to balance the individual’s right to participate — a longstanding principle of rugby league and at its heart from the day it was established — against perceived risk to other participants, and to ensure all are given a fair hearing.”

Translation without the PR word salad: 'We realize transgenders ruin women’s sports, and now we’re going to do something about it.'

Not everyone's happy that some sports leagues are displaying some common sense. Megan Rapinoe, everyone’s favorite America-hating lesbian who also plays soccer in her free time, said that the uptick in transgender bans makes no sense because there is no evidence that anything has changed in women’s sports as a result.

Related: FIFA Kicks Around Idea Of Transgenders In Women's Soccer

“Show me the evidence that trans women are taking everyone’s scholarships, are dominating in every sport, are winning every title,” Rapinoe said. “I’m sorry, it’s just not happening. So we need to start from inclusion, period. We can’t start at the opposite. That is cruel. And frankly, it’s just disgusting.”

Sorry Rapinoe, but it’s not disgusting to look at what Lia Thomas is doing in swimming and think that something needs to change. It’s not cruel to see Connecticut high school track star Chelsea Mitchell lose to transgender opponents and want something to be changed. And it certainly isn’t wrong for FINA and IRL decide that the future of women in their respective sports leans heavily on what they do in this pivotal moment.

Women belong competing with women, and men belong battling against men in sports. It’s that simple.