Because we are in the midst of Pride Month, it's unfortunately normal to see professional sports teams hold their annual Pride Nights. On Saturday, the Tampa Bay Rays had theirs, in which they included LGBT people in pregame events and handed out pride flags to the 19,000+ fans in attendance. In addition, the “TB” and sunburst logos on the Rays uniforms were rainbow-colored to show an added level of support.

Today, we wear our #Pride on our sleeves pic.twitter.com/bcOLJNhx6Y

However, several Rays pitchers decided not to participate in this gesture in order to stay true to their beliefs.

Jason Adam, Jalen Beeks, Brooks Raley, Jeffrey Springs, and Ryan Thompson all decided to not wear the rainbow-colored patches on their jerseys during Saturday’s game against the Chicago White Sox due to their faith in Jesus. 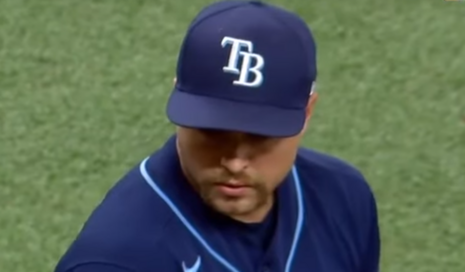 "So it's a hard decision…But when we put it on our bodies, I think a lot of guys decided that it's just a lifestyle that maybe -- not that they look down on anybody or think differently -- it's just that maybe we don't want to encourage it if we believe in Jesus, who's encouraged us to live a lifestyle that would abstain from that behavior,” Adam, the chosen spokesperson for this group of pitchers, said.

Notice how Adam worded this. He never said that he thinks he or his teammates are better than anyone in the LGBT community, because true and honest Christians would agree that everyone has “sinned and fall short of the glory of God” (Romans 3:23). But the truly remarkable part of his response was that he and his teammates unwaveringly commit to their faith in a culture and time where it is incredibly easy to forsake it so you do not face backlash.

Predictably, there was plenty of flack thrown their way after their decision went public.

LGBT sports journalist Cyd Zigler, who contributes to OutSports, wrote a response to the players and called them homophobic and accused the Rays leadership for failing to get these men to go against their beliefs.

“Unfortunately, the Rays management approached this differently, allowing homophobia amongst a handful of 20-somethings to drive the uniforms that some of the players wore,” Zigler said.

He also tried to use the Bible to make it seem like wearing pride insignia would have been permissible for these men to wear.

Will someone please show me the Bible passage that says "Thou shalt not wear a rainbow on thou's clothing"...https://t.co/erj3ksEkjo https://t.co/M2OIHG8zdu

Romans 1:26-27 states that homosexuality is unnatural and sinful and should not be condoned in any way by followers of Christ. Wearing pride flags or pride logos does just that.

St. Louis Cardinals pitcher Jack Flaherty also got in on the shame game and ridiculed the group of pitchers for their beliefs. What makes this ironic is that Flaherty has a Bible verse in his Twitter bio.

So not only is he shaming these men unnecessarily, but he’s also discouraging men that he should be claiming as brothers in his faith.

Regardless of what impact the decision by these pitchers will have in the future, it is nonetheless admirable that Adams and his friends decided to stand against the corrupt tide of culture. Our country is in desperate need of more men like them.