You can always count on the NBA and ESPN to turn any sporting event into a chance to push a woke agenda. 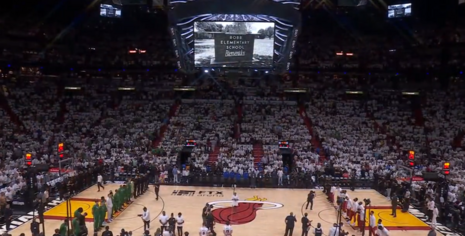 Before Wednesday night’s Game 5 of the Eastern Conference Finals between the Miami Heat and the Boston Celtics, Miami PA Michael Baiamonte addressed the sellout crowd and asked for a moment of silence for the victims of the Uvalde, TX shooting. Immediately after the respectful gesture, Baiamonte pleaded with the crowd to contact their local state senators to demand more gun control laws.

A moment of silence. pic.twitter.com/8Ycn1uqN0i

“The Heat urges you to contact your state’s senators by calling 202-224-3121 to leave a message demanding their support for common sense gun laws,” Baiamonte pleaded. “You can also make change at the ballot box. Visit heat.com/vote to register and let your voice be heard this fall.”

Those “common sense laws” that Baiamonte and Golden State Warriors head coach Steve Kerr advocate for -- which is basically increased gun control -- actually do not work.

A large number of Americans incorrectly believe that taking away guns will prevent tragedies or gun violence in general from happening. But as some data from Chicago shows, strict gun control laws does not solve the bigger problem. If people, like the man that brutally killed 19 children and two teachers in Uvalde, are determined to kill someone, they’ll find a way to do it even if guns are not at their disposal.

Wait, wasn’t Sage Steele suspended for voicing her political views in a podcast? And doesn’t ESPN have a strict no politics policy for their employees that prevents them from commenting on any social issue, especially during a broadcast?

That must not apply to Stephen A. After all, he did say something that fits perfectly with ESPN’s woke value system, so there’s no need to reprimand him.