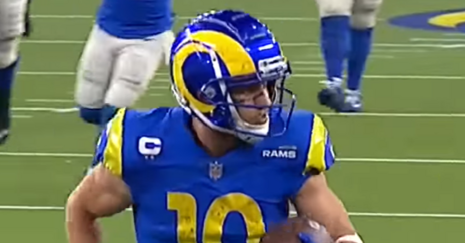 Los Angeles Rams wide receiver Cooper Kupp has had a season for the ages in 2021. He led the league in receiving yards (1,947), receptions (145), and touchdowns (16), becoming just the fourth receiver in NFL history to lead the league in all those categories in the same year.

Kupp is an elite route-runner who creates matchup nightmares for opposing secondaries, but some debate whether or not he gets enough credit and recognition for the spectacular job he does. However, ESPN’s Ryan Clark thinks that the reason why the wideout’s accomplishments go largely unnoticed is that Kupp is white.

Speaking on The Dan Patrick Show, Clark stated that people do not put him in the conversation with some of the best wide receivers in the NFL today because they get too wrapped up in his skin color:

“If Cooper Kupp were black, we’d all talk about him in a different way,” Clark said. “A lot of times we look at the (skin) color of a wide receiver and we want to compare them to people who they look like, more so than people who they play like.”

He said that Kupp should be in the conversation with receivers like Green Bay’s Davante Adams and Arizona’s DeAndre Hopkins, who are widely considered to be the premier receivers of the league.

To be fair, Kupp’s style of play has earned him comparisons to retired – and ironically, white – NFL stars Wes Welker and Julian Edleman because both are “slot-receivers” (players who are good at operating in tight spaces over the middle of the field). But Kupp is compared with these wideouts because their roles and style of play are similar, not merely because they have the same skin color.

Both Hopkins and Adams are incredible receivers in their own right, but they just play a different brand of football than Kupp does. These receivers specialize in one-on-one situations and by making flashy plays, whereas Kupp does a lot of the thankless dirty work in the middle of the field by running shorter routes in tight spaces. As a result, he does not generate as many highlight-worthy plays, even though he puts up gaudy numbers.

So not only does the comparison between players not hold any water, but it also minimizes the things both breeds of receivers accomplish. By Clark saying Kupp would get more hyped up if he were black, he is insinuating that being black is the only way to get lots of media attention as a wide receiver, which in turn minimizes anything wideouts – black or white - accomplish on the gridiron.

Instead of getting engulfed in meaningless variables like media time and skin color, we should be thankful and impressed by the incredible athleticism we witness on a weekly basis and reject idiotic takes like this.