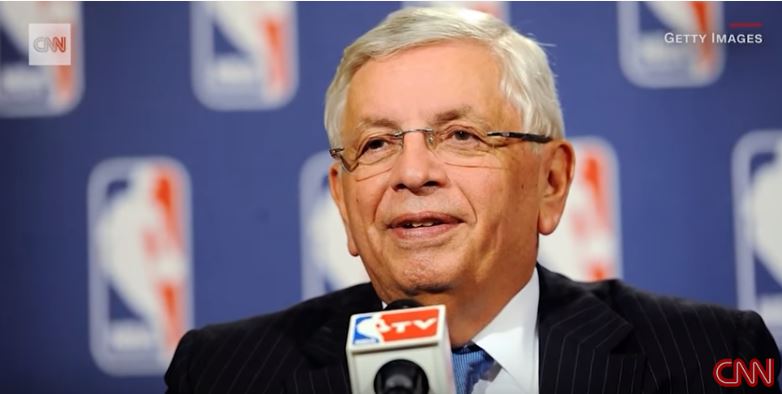 Even progressives can be seen as racists now; people like former NBA Commissioner David Stern, who died New Year's Day at the age of 77. ESPN's Jeremy Schaap called him the greatest leader of any sports league ever, a man who will be remembered for elevating the NBA. The Nation's Dave Zirin alleges Stern globalized the NBA brand while simultaneously championing progressive causes and racist policies while serving as commissioner from 1984 to 2014.

Zirin says Stern (seen in photograph) integrated "an exploding 1980s musical form, hip hop, into the marketing of the league. In other words, he used black culture to fast-track the NBA’s growth."

Stern, Zirin says, oversaw the formation of the WNBA and diversity initiatives that branded the NBA as "a progressive, forward-thinking institution." The WNBA is widely regarded as the most far Left pro sports league in America. But Stern's progressivism didn't rise to Zirin's desired radical level and he "wasn’t all sunshine and gingerbread."

In 2005, Stern attempted to clean up the NBA's sloppy image with a dress code that Zirin calls "despised." Players were monitored and subject to fines based upon what they wore off court. He raised the age limit for players entering the league, and these acts were seen as signs of racism by the same man who ushered an urban, hip-hop culture into the NBA world. Zirin writes more:

"He was unapologetically ruthless when it came to both negotiating with the players’ union and protecting the league’s image as a safe sport for white, middle-class consumption. This dynamic ramped into high gear following the 1998–99 players lockout. Stern won the battle against the union after canceling almost half the season. He proceeded to project himself as a king of the sport: biting, sarcastic, and more brazen about enforcing his will on the players."

Stern often exerted his power "in a ham-handed, patronizing manner, utterly insensitive to how a majority black league would perceive his directives. The 2004 'Malice in the Palace,' the fight between members of the Indiana Pacers and white fans of the Detroit Pistons, only stirred up more of Stern’s fears that the league was pushing away white audiences. The brawl made Stern reactive and even, one might say, reactionary."

Stern suspended nine of those players for their misbehavior, for a total of 146 games and salary losses of $11 million. And if he was reactionary, then so were law enforcement officials who charged five players with assault, and eventually sentenced them to a year of probation and community service.

As commissioner, Stern did nothing to save the careers of "NBA rebels" Craig Hodges and Mahmoud Abdul-Rauf, "who were driven out of the sport for acts of political resistance. This is all part of his legacy."

Abdul-Rauf refused to honor America during the playing of the Star Spangled Banner; Hodges pushed anti-George H.W. Bush politics during a visit by the champion Chicago Bulls to the White House. This player activism now commands total acceptance by group-thinking sports writers, though it did not do so in the 1990s.

While Stern's successor, Adam Silver, pushed racist Donald Sterling out as owner of the Clippers, Zirin zings Stern for not having done so.

Zirin, the friend of Michael Bennett, Colin Kaepernick and other sports grievance mongers, says we should listen to Hodges, Abdul-Rauf, fans and everyone else "who was injured under the weight" of the progressive, forward-thinking Stern's reign.