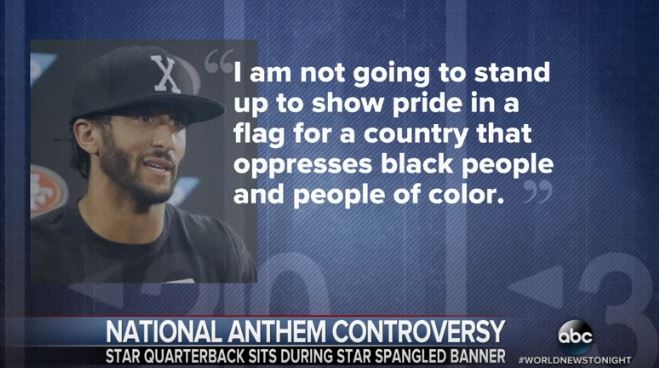 Hey, any of you NFL owners out there interested in entrusting your team's fortunes this season to a man leading a Black Panther-inspired movement and a fight for black liberation in his spare time? Yes, it's Colin Kaepernick, who came out swinging at police, system oppression and the NFL again today, practically taking over The Paper, a publication featuring commie radical Angela Davis, Kaepernick's kneeling sidekick Eric Reid, and Victoria Secret's first trans model.

While serious pro quarterbacks are devoting themselves to the upcoming 2019 NFL season, Kaepernick (seen in file photo explaining his protest in 2016) lashed out with this anti-cop hate bomb in an August 14 tweet, including an anti-cop video: 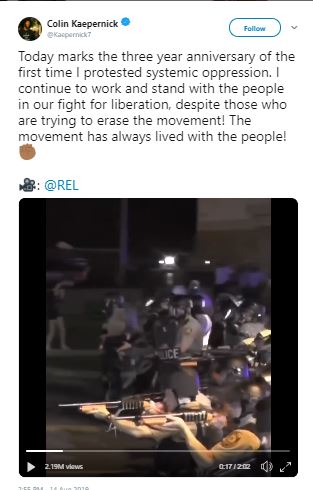 Kaepernick also guest edited The Paper's story, "Colin Kaepernick wants you to know your rights," authored by Miabelle Bocicault, Dr. Ameer Hasan Loggins and Dr. Christopher Petrella, all of them identified as Kaepernick's Know Your Rights Camp members. Try that brand of "journalism" on for size. You feature one of the most notorious radicals in the country, allow his people to write the story and let him "guest edit" it for you!

The big revelation in this story, also reported on by TMZ, NBC News and others, was that a few months after San Francisco police shot Mario Woods, 26, dead for waving a knife at them and refusing to stand down, Kaepernick, who called it an "execution," went full Black Panther.

The man who started the cop-hating and kneeling movement in 2016 then began reading up on and following the lead of Black Panthers Bobby Seale and Huey Newton and their 1966 roadmap to Black freedom. "Black people will not be free until we are able to determine our destiny," they co-wrote. They were obsessed with police brutality, just as Kaepernick is today, as he stated:

"That was over 50 years ago. And what has changed?. Oscar Grant, Rekia Boyd, Michael Brown, Tamir Rice. What has changed? Laquan McDonald, Sandra Bland, Freddie Gray. The Panthers' demands are still alive today because the police are still killing us today."

The Paper authors wrote: "Week after week, Kaepernick could be found devouring texts on the global struggle for Black freedom and self-determination. His bookshelf was overflowing with titles like The Autobiography of Malcolm X; Women, Race, & Class by Angela Davis and Huey P. Newton's autobiography, Revolutionary Suicide. The texts offered Kaepernick ideas for architecting the (Know Your Rights) camp (KYRC) and its curriculum."

"KYRC is pillared around 10 fundamental human rights, in homage to the Black Panther Party's Ten-Point Platform and Program," wrote the story's Kaepernick-controlled authors. "According to Kaepernick, the principles represent the types of affirmations and protections that ought to be enjoyed by Black people globally."

The campers, typically kids ages 12-18, are encouraged to pursue education, but they're also indoctrinated in activism and armed with The Autobiography of Malcolm X.

The Paper story concluded: "In the spirit of love and courage, the following freedom fighters have collectively transformed their cultural power into a non-negotiable demand for Black liberation. Together, these 10 individuals selected by Colin Kaepernick represent the living embodiment of Know Your Rights Camp's 10 principles and inspire us all to fight for our freedom... by any means necessary."

"By any means necessary" is a big red flag, and so are some of the 10 individuals cited above, whom Kaepernick selected to write more for "the cause." Among them is the commie radical Angela Davis ("You have the right to be brilliant"). The submissive Paper again turned the reins over to Kaepernick, who curated interviews with each of the 10 writers.