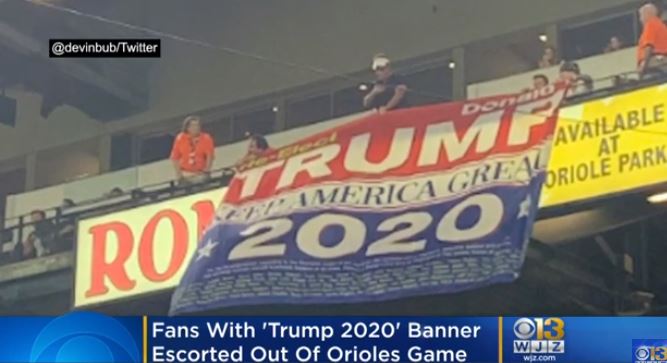 Members of the sports media were thrilled when the Baltimore Orioles on Thursday night took four President Trump fans not "out to the ball game," but out of "the old ball game." Doing their best to make Baltimore baseball horrible again by taking an 11-2 shellacking from Toronto, the cellar-dwelling Orioles removed the fans for displaying a large Make America Great Again banner advocating for the re-election of President Donald Trump in 2020.

The Washington Post's Scott Allen reported the banner was displayed for less than 10 minutes and that some fans in the crowd of 9,716 chanted, “Take it down!” before police and stadium officials told the fans to remove it.

Allen writes that Orioles' policy "prohibits displaying banners during a game, except between innings, and states that 'banners are subject to confiscation if the content is commercial, political, and/or in bad taste according to the Orioles’ discretion.'”

Other sports media villainized the president over the issue.

The Baltimore Sun's Orioles beat writer Jon Meoli tweeted the sign "has not been well received."

"The situation at the Orioles’ home ballpark comes amid the controversy spawned by Trump, who condemned Baltimore as 'very dangerous & filthy' and 'disgusting, rat and rodent infested' on Twitter last weekend.

You can see cops order the men to pull their sign up, which they do -- while basking in the boos from other pissed off fans...FYI, the Orioles have an anti-banner policy at the stadium ... prohibiting fans from displaying ANY signs during the game -- especially if the team feels the signs are in 'bad taste.'

"Of course, Baltimore and President Trump have been in the news all week long ... POTUS called the city a 'rodent-infested mess' and opinions from both party lines have gushed in ever since."

As police led the four Trump backers out of the stadium, some fans booed and chanted “Na na na na, hey hey hey, goodbye.” As one of those fans wrapped up the banner, he yelled, “Six more years! He’s still your president!”

Allen mentioned that many teams have policies disallowing certain messages on banners, and in 2017, the Washington Nationals confiscated an "Impeach Trump" sign because they viewed it as a violation of the Nationals’ guest conduct policy.

Earlier this week, The Shadow League's Carron J. Phillips played the race card on President Trump over the Baltimore issue:

Phillips said Trump's actions "often resemble those of a toddler" who went after Cummings for “being a bully” to members of the Border Patrol. "You know, the people who are cool with getting a check for dehumanizing innocent men, women, and children who are seeking better opportunities in our country."