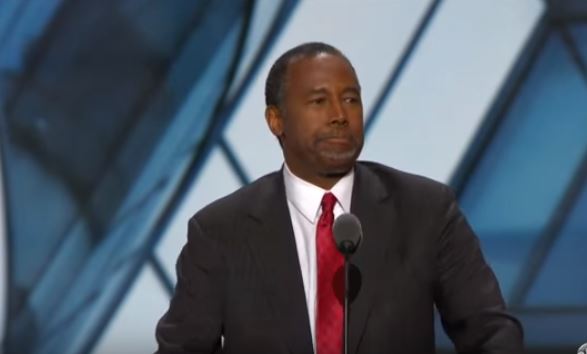 The racist insult of Carson (see file photo) came as part of a story criticizing Bob Johnson, long regarded as a model of success for African-Americans, but who is straying from the "plantation," calling the Democrats too far Left and buddying up to President Trump. Phillips isn't having any of it. He criticized Johnson, the co-founder of BET and majority owner of the NBA's Charlotte Hornets because he's no longer "doing it for the culture."

Phillips' headline reads, "We Shouldn’t Be Surprised That Bob Johnson’s Praising Trump, Again" and his sub-head complains, "It’s always disappointing when our history makers pander to people who’ve never cared for us."

Johnson became the first African American majority owner of an NBA team and the first black person to crack Forbes’ billionaire list. He voted Hillary Clinton for president in the 2016 election, but later turned down a cabinet position offered by President Trump. He was "the man," Phillips writes. "But that was then, and this is now. And recently, Johnson hasn’t necessarily been 'doing it for the culture.'” Neither have former NFL great Jim Brown and Secretary Carson.

Speaking sacrilege to the Left, Johnson said to CNBC earlier this week, “The (Democratic) party in my opinion, for me personally, has moved too far to the left. And for that reason, I don’t have a particular candidate (I’m supporting) in the party at this time. I think at the end of the day, if a Democrat is going to beat Trump, then that person, he or she, will have to move to the center and you can’t wait too long to do that.”

It gets even worse for Phillips because Johnson told CNBC that he was concerned about the lack of compromises between Democrats and Trump. Johnson said there is “really no give or take in terms of trying to come to an understanding of how best to run the country,” and Phillips added "as if bargaining with a White Supremacist who hasn’t shown anyone respect, is even capable of bipartisanship."

Johnson further angered Phillips by praising Trump for an economy that's been good for African Americans.:

That counts for nothing to Phillips, who tried to give credit to former President Barack Obama.:

"Mind you, the unemployment rate for black people was on the decline under Obama and was down to 7.8% when Trump took office."

Johnson’s situation reminds Phillips of Carson and Brown, "two other older black men that were once, and still, are by some, held in high regard in the culture.":

"Carson, the former world-famous neurosurgeon, used to be someone we proudly touted as he was a trailblazer in the medical field, becoming the first person to ever successfully separate conjoined twins. But all that changed when Carson started to demean black people with his words and actions after taking a cabinet seat with Trump, transforming himself from a Black History Month linchpin to the president’s favorite house negro."

Brown reminds Phillips of "who he always was when he made public comments supporting Trump and criticized black players in the NFL for kneeling in protest, leading us to remember his long history of domestic abuse and violence against women."

A Hall of Famer who played for Cleveland from 1957 to 1965, Brown said he should be critical of President Trump, but instead pulls for him. “Now, that would make me very unpopular in the black community, very unpopular with a lot of Americans … but I think that there are certain good things that are coming out of this presidency because we’ve never seen anything like it.”

That's way over the top for Phillips, who responds: "It’s often been said that age comes with wisdom. But in the case of Bob Johnson and the likes of Ben Carson and Jim Brown, they’ve proven that seniority doesn’t always adhere to sensibility, just as youth is often wasted on the young."