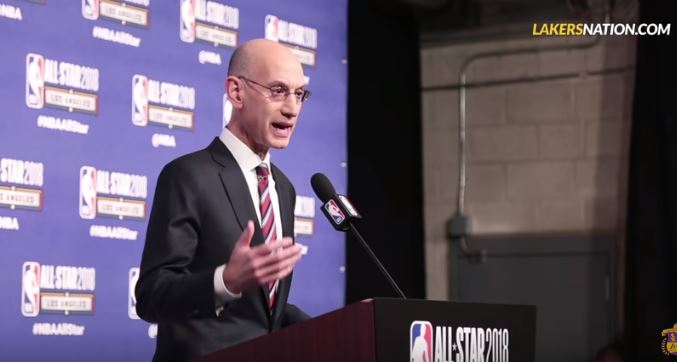 It was just 19 days ago that TMZ Sports and Newsweek magazine stirred up talk about the NBA possibly changing the way it refers to team owners. To the ultra-sensitive, it's supposedly a racially insensitive title. At the time, Newsbusters reported there was no pressure from the NBA to succumb to this over-the-top political correctness, but now the league's commissioner is talking about doing away with the O-word, notes CBS News.

"NBA Commissioner Adam Silver (seen in file photo) said the NBA will look to move away from the use of the term 'owner' to describe those with controlling interest of teams in favor of terms like 'Governor of the team,' 'alternate Governor,' or even 'Chairman,'" CBS reports.

The CBS story says the NBA is concerned that the term "owner" can be seen as "racially insensitive in a league where the vast majority of players are African American and the majority of those with ownership stakes are Caucasian." TMZ pressed Commissioner Silver on this issue, and he said:

"I don't want to overreact to the term because, as I said earlier, people end up twisting themselves into knots avoiding the use of the word 'owner.' But we moved away from that term years ago with the league. We call our team owners 'Governors' of the team and 'alternate Governors.' So I think it makes sense. As I said, I don't want to overreact ... but I'm sensitive to it and I think to the extent that teams are moving away from the term, we'll stick with using governor."

The snowflakes at TMZ say this is about "softening the tone of the person's title who controls the business franchise."

Clay Travis, Fox Sports radio talk show host and founder/lead writer for the Outkick The Coverage blog, strongly disputed that there is any racist undertone connected to the word "owner" and blasted the NBA. He said Commissioner Silver caved in to the social media stupidity of a tiny and obnoxiously vocal minority. Continuing on with his criticism, Travis said:

“We used to not allow the dumbest group of people in the country lead us but then social media happened. We have entered into such an absurd politically correct society. The term ‘owner’ is not remotely racially insensitive and the fact we are bending our language to reflect the stupidity of people is a sign that our society is fundamentally on the wrong track.”

Two years ago, the Golden State Warriors' forward Draymond Green talked about the word "owner" relating to slavery. This became idle media talk in early June, and then today the leader of the NBA gave into political correctness. Green's original comments in 2017 were:

"Very rarely do we take the time to rethink something and say, 'Maybe that's not the way.' Just because someone was taught that 100 years ago doesn't make that the right thing today. And so, when you look at the word 'owner,' it really dates back to slavery. The word 'owner,' 'master' — it dates back to slavery... we just took the words and we continued to put it to use."