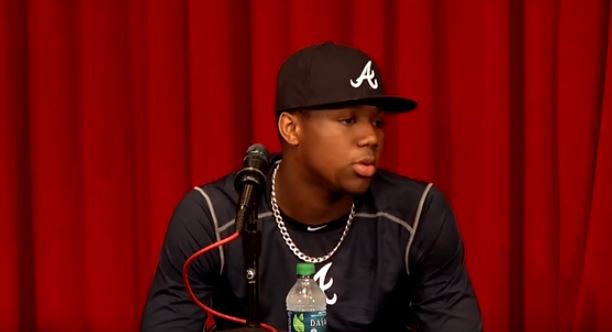 From historically black colleges and universities (HCBU) to the major leagues, baseball is playing the race card, says The Shadow League's Carron J. Phillips. African Americans aren't welcome in baseball, and the game hasn't made any real improvements in race relations ― in Philips' jaded perception:

"And right now, it sure feels like the game of baseball is doing its damnedest to let black people know that we’re not wanted in the game that we once made great."

The participation of African Americans in the sport of baseball is unquestionably in decline, as more athletes prefer to play football and basketball. Phillips insists it's a systemic problem of racism in baseball though. Winston Salem State is disbanding its baseball program after this season. Howard, South Carolina State and Morgan State previously discontinued the sport.

Phillips writes: "It’s gotten so bad at a place like Bethune-Cookman that there have been times this season where they haven’t started an African-American, as there are only four on the roster. However, this isn’t just a BCC or HBCU baseball issue, as according to the NCAA, only 4% of college baseball players were African-American in 2018."

Where does the fault lie? Why, with Major League Baseball, of course.

"It’s a trickle-down effect from what’s taking place in the Major Leagues, as African-Americans only comprised 7.8% of Opening Day rosters this season, which is a far cry from the 18.7% in 1981,"Phillips alleges.

Phillips admits he isn't the biggest fan of baseball, but it's "largely due to how they’ve treated African-Americans for decades ... ." Nevertheless, many African Americans still love baseball "despite all the recent examples that point to how baseball’s culture isn’t too fond of us." He cites just two specific cases in point.

In 2017, Adam Jones, then a member of the Baltimore Orioles, was called the N-word and had peanuts thrown at him during a game in Boston. "Other black players around the league quickly confirmed that the behavior wasn’t out of the norm in Boston," Phillips adds.

In 2018, Ronald Acuna Jr. of the Atlanta Braves (see photo) "was reprimanded" for cocking his hat to the side during an interview. The Braves prefer their players to conduct interviews with their trademark "A" facing the camera straight on. An internet search offers no evidence of a reprimand, and my story at the time reported there was no punishment, but Phillips went off the deep end about baseball requiring its players to play the "white way."

Earlier this season, MLB fined the Chicago White Sox African American shortstop Tim Anderson and suspended him for one game for calling a white rival the N-word. To Phillips, that proved "once and for all that Major Leagues Baseball has no idea how to deal with black people. As I said, if baseball really wanted us around, the game sure does have a funny way of showing it." He wonders what happened to all the progress in race relations that MLB loved to promote. It's a false narrative, he says.

Aiming to promote diversity in baseball, HBCU teams are getting ready to compete in a "world series" of their own. MLB Commissioner Rob Manfred will attend. Phillips is skeptical of the intent and the results, and says "it will be just another example of America’s past time pretending to care about us."