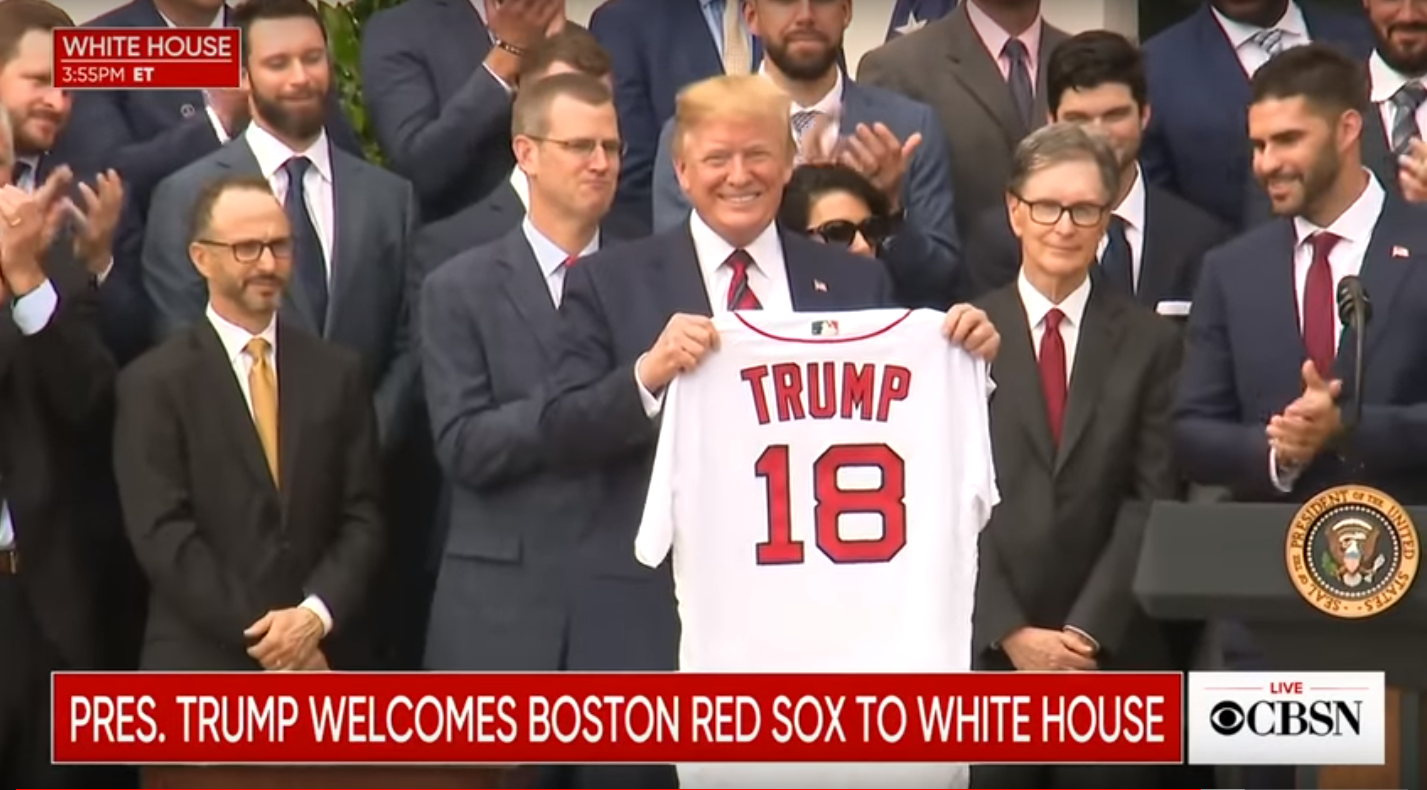 President Donald Trump divided the 2018 World Series champion Boston Red Sox along racial lines. That's a recurring narrative of media reports on today's visit by the baseball champs to 1600 Pennsylvania Avenue. Some in the press mocked the visit as mostly made up of the “white sox.”

Critical media also chastised the Trump White House for a tweet referring to the "Red Socks" and a reference to the 2018 "World Cup Series Champions.

The Associated Press reported, "The Red Sox repeatedly denied that there was any sort of racial divide caused by the White House visit, which has been transformed from moment of celebratory ritual to hyper-politicized event under Trump."

"And nearly a dozen members of the team, all players of color, skipped the opportunity to shake Trump's hand. Meanwhile, every white player on the team -- as well as outfielder J.D. Martinez, who is of Cuban descent -- attended," AP reported.

Championship Red Sox teams have visited the White House under Republican and Democratic administrations, "But the events have taken on sharp political overtones since Trump took office," AP wrote.

CNN's Betsy Klein added to the media groupthink reporting with her headline, "Trump's invitation leads Red Sox players to split along racial lines" and this:

"The Boston Red Sox visit to the White House on Thursday highlighted President Donald Trump's complicated history with professional athletes of color, as the world championship baseball team's attendance broke down along racial and ethnic lines. ...

"Trump has long been a racial lightning rod, from his tepid response to the violence of white nationalists to his stark anti-immigrant rhetoric throughout his time in office and campaigning.

"But he has frequently railed against African-American NFL players who have protested police brutality by kneeling during the National Anthem. Players have said the protests, which began in 2016, are intended to draw attention to what they see as systemic bias against people of color."

Klein also mentioned that Boston sports columnist Steve Buckley had tweeted, "So basically it's the white Sox who'll be going."

Boston WBZ TV reporter Sam Roche reported from the White House that a team official didn't see a racial divide on the team, "but the pictures from today's team White House visit seemed to tell a different story. Mookie Betz, Jackie Bradley Jr., David Price and Manager Alex Cora opted to skip this one. Even (retired) David Ortiz turned down an invite to join his former team here in D.C. ... "

In the run-up to the White House event, anti-Trump media worked feverishly to attack the event. USA Today was especially active in recent days portraying the president as a racist and urging the entire Red Sox organization to boycott Trump's reception. On Thursday, the paper ridiculed the president for the Red Socks and World Series Cup comments and posted 18 negative tweets about those errors. Scott Gleeson ran inflammatory quotes by retired Boston slugger David Ortiz, a native of the Dominican Republic, aired on Boston radio WEEI Monday:

"You don’t want to go and shake hands with a guy who is treating immigrants like (expletive) because I’m an immigrant. Once you see what is going in this country based on being an immigrant or being black, it’s something that goes beyond going into the White House and shaking hands with the President just because. ... It’s like you are going to shake hands with the enemy. Think about it, all the stuff that has been going on since (Trump) took office. People are angry. People are mad. He has divided people, that’s how it feels like.”

Gleeson wrote that the Red Sox "opened the door for conflict and criticism in recent days for allowing individual players to decide whether to attend the White House event Thursday afternoon."

WBZ's Anna Meller reported, "Red Sox White House Visit Clouded By Politics, Race." Her video report focused in part on hurricane devastation in Puerto Rico, which led Cora to skip the celebration because he didn't think the president acted appropriately to that tragedy.

Baseball writer Bob Nightengale pressed the attack on Trump, too, in this USA Today video:

"In what should be a glorious, rampant celebration for the Boston Red Sox celebrating their 2018 World Series championship instead has turned to a point of controversy. Right now the only players going to the White House are Caucasian. The minority players have chosen to go home and boycott the White House ... all you're gonna see is a sea of white faces."

Except for the faces of Latins J.D. Martinez and third-base coach Carlos Febles, who was also there in Washington. Just two small errors by Nightengale.

Today President Trump said (see complete remarks here), “It’s my pleasure to welcome to the White House the 2018 World Series champion Boston Red Sox. A very special group of people, a very special team." Roche's report also noted that those who chose to go enjoyed the experience, which included a tour to the Oval Office and the Lincoln bedroom.