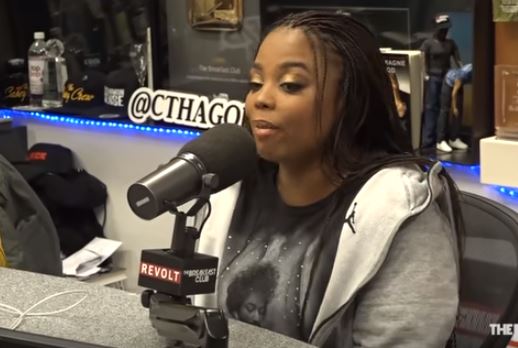 Week 2 of the "Jemele Hill is Unbothered" Spotify podcast proved that she and her Atlanta guest, Michael "Killer Mike" Render, are greatly bothered by racist Republicans and the fact that Georgia's elections are overseen by the secretary of state's office. Sen. Bernie Saunders is their great white hope for president in 2020, and both socialists are all in on reparations for the descendants of slaves.

As a co-anchor at ESPN's SportsCenter 6 in 2017, Hill (see photo) did not stick to sports and was pushed out for, among other blunders, tweeting that President Trump and his supporters are "white supremacists." She's now a writer at The Atlantic, a progressive publication, and just started her new podcast last week. She introduced her guest, Killer Mike, as "a rapper, life coach, lyracist, and shit talker."

"Or you all let the racists speak for you!" Killer Mike blurted out, drawing agreement from Hill.

Hill said all of us harbor some prejudices and bigotry but Republicans, Libertarians and "conservatives period could do a better job of having people in speaking roles that can get across those barriers." She claims they have "just have given up, in terms of trying to reach people of color ... no they don't have to concede that at all, and I don't think black people automatically want to vote Democrat."

Killer Mike replied, "But we're left with no choice."

Hill asked her guest who's going to be our president in 2020, prompting him to campaign for Bernie:

Killer Mike credited Trump for succeeding with prison reform, while "at the same time Obama was president we were droppin' bombs ... I've seen Democratic presidents not do it, including the two we love ... I have to look at crazy orange man and say, 'crazy orange man, thank you for doing that.' if nothing else."

Hill and Killer Mike agreed that allowing a secretary of state to oversee elections, as it's commonly done in Mike's Georgia and several other states, is "cheating." Killer Mike said Georgia's unsuccessful Democratic candidate for governor in 2018, Stacey Abrams, "won the hearts and minds of Georgians and let us know that we could once again become a blue state. She didn't win that election, and that's unfortunate, but the guy in office, Brian Kemp, is not a monster. He's a moderate Republican. He's someone that our community can negotiate with for the betterment of our communities. --"

"–In spite the fact that he might be a cheater," Hill interrupted.

"Like the fact that the system is set up to cheat," Killer Mike interjected, with Hill adding Kemp encourages that system. Both said they want to change the system of elections run by the secretary of state's office.

The Unbothered podcast also included discussion on reparations and support for Rep. John Conyers' bill (Dem-Mich.) for that to pass it through Congress. "It's taken us 40 years as an African-America community," Killer Mike said. "This should be on top of our agenda for the next hundred years ... The American descendants of slaves absolutely deserve reparations." And his man Bernie Saunders is in favor of reparations, too.