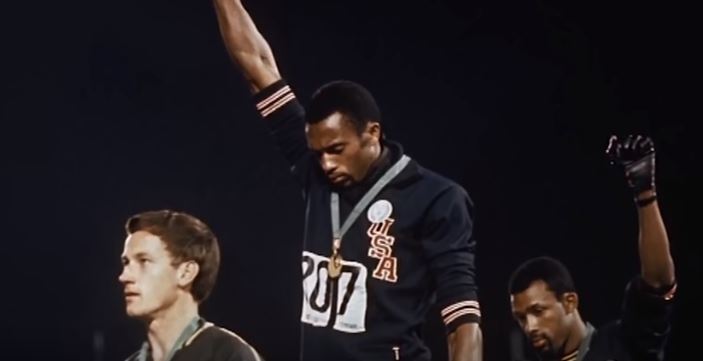 For many Americans, social justice warriors in sports uniforms have disrespected America and turned them away from sports. The Nation's Dave Zirin has made a slobbering career of apologizing for and glorifying these malcontents. He's written books on 1968 Olympic protester John Carlos and radical NFL player Michael Bennett. He staunchly defends Colin Kaepernick and others who politicize sports, too. Zirin is the "parallel universe," and this week he bitterly complains that Carlos and fellow '68 Olympic protester Tommie Smith are being disrespected by their alma mater, San Jose State University.

Fifty years ago, Smith and Carlos were America's top sprinters. In the 1968 Summer Olympics in Mexico City they won two of the three medals in the 200-meter dash. On the victory stand, during the playing of the Star Spangled banner, they looked down at the ground and raised their gloved hands to the air in protest to racism. Those in the stadium and watching around the world were stunned. The International Olympic Committee booted them out of the Olympic Village and sent them home in disgrace.

America's disgrace became a "noble" cause for far Left writer Zirin and San Jose State U. He wrote the book, The John Carlos Story: The Sports Moment That Changed the World. San Jose State built statues to the two malcontent sprinters, but Zirin claims the two SJWs are now being treated horribly by the university.

"I reached out to John Carlos, whose statue adorns the campus, for his reaction to the news. To say he was dismayed is an understatement. 'They are trying to dispose our history with the school. I’m sure down the line they are going to try to pull our statue down too. It’s wrong. And it’s been wrong, how they’ve treated our history for some time.'”

Self-tasked with defending social justice warriors, Zirin says the track "is still used by young runners who feel the sense of history with every stride." Downtown College Prep Track and Field Coach Rich Read says, “It’s a big shame to see it go, a chunk of my heart out the door. That moment in history you feel it’s almost going to get lost, even though it happened and you have it recorded it just feels like it will disappear.” It can't disappear soon enough for Americans old enough to remember the shameful incident.

Ron Davis, the former head track coach at San Jose State, agrees with Zirin and Read. He told Zirin the timing of this move is awfully convenient, taking place one year after 2018, when the school commemorated the 1968 Olympic team. And says it's dishonoring to "their athletic importance as well as the social importance of what they represented to the world. The school reaped the good will and publicity fostered by the 50th anniversary remembrances, and then, after the confetti was swept away, went after the track because there is no commodity more valuable to the modern university than real estate."

Davis complained the university has "no love" of its track history or the individuals who made that history. "The removal of the track at San Jose State University is a step to erase the great history in track and field at the school.”

An unnamed former distance runner and teammate of Davis said to him the loss of the "hallowed ground" is “another dagger in the heart, another sad day for the Spartans."

A sad day for the Spartans and a sadder reminder for Americans offended by the acts of Smith and Carlos.