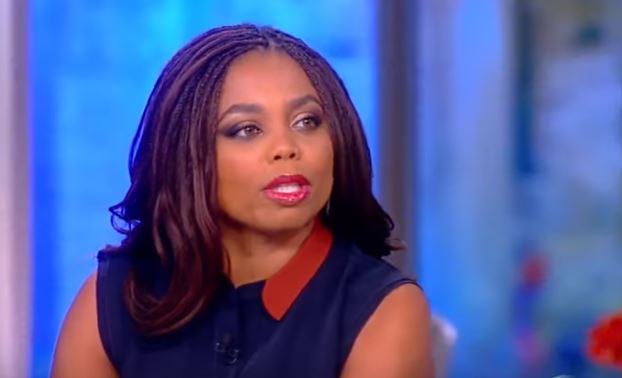 Jemele Hill just can't help her race-baiting self. The liberal sports journalist added yet more notoriety to her one-track career Monday morning via Twitter. This time she outrageously claimed the purpose of the Electoral College is outdated and was intended to "preserve slavery." Oddly enough, this time the politico she was disagreeing with was none other than a Democrat.

In 2017, Hill (shown in 2018 appearance on The View) called President Donald Trump and his supporters "white supremacists." She has used numerous speaking engagements and an appearance on The Late Show to double down and defend that offensive claim.

Last month, the writer went low again when, during the State of the Union Address, she joked about killing President Trump.

"The problem with deciding Presidential elections via popular vote is that candidates would naturally campaign in urban areas with big media markets and their policies would follow suit. Better to have proportional electoral college votes in each state so you campaign everywhere."

Hill rejected that by elevating diversity over the U.S. Constitution's Article 2, Section 1 with this tweet:

"Nah. People who live in cities that truly represent the diversity of America should set the course. The electoral college is outdated, and was there to preserve slavery. We need to move on." 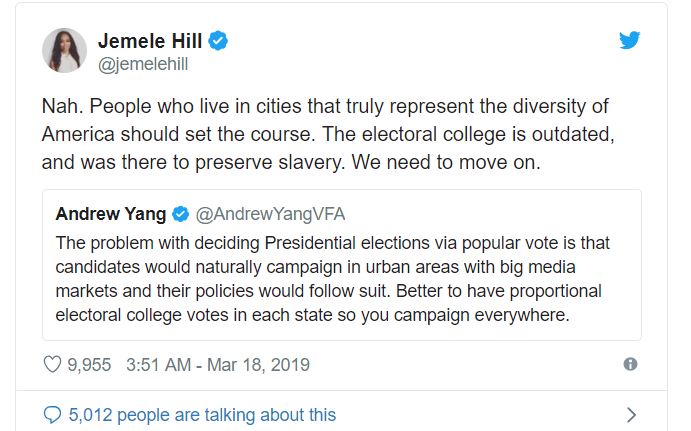 Though Hill tweeted herself out of a job at ESPN, her current employer, The Atlantic magazine, is getting exactly what it wanted from her. Editor-in-chief Jeffrey Goldberg said in October 2018 she had been hired to make "useful trouble":

Appearing with Stephen Colbert on The Late Show in November 2018, Hill insisted Trump is still a "white supremacist." Colbert held up a placard of her "white supremacist" tweet and she said, "Show me the lie."

Since joining the progressive staff at The Atlantic last fall, Hill has written almost exclusively about race or herself.