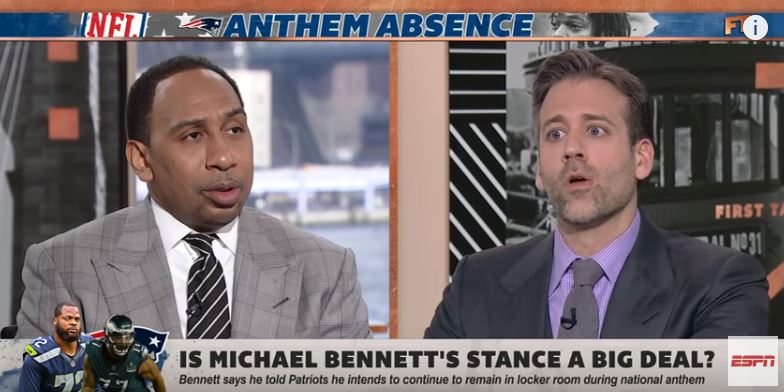 NFL social justice warrior (SJW) Michael Bennett's impending trade to the New England Patriots renewed the debate Tuesday over national anthem protests. The former Seahawk, soon-to-be former Eagle and outspoken SJW told the Patriots he will remain in the locker room during the playing of the Star Spangled Banner. This prompted a debate between ESPN First Take's Stephen A. Smith and Max Kellerman on whether or not this is a big deal.

Kellerman said that when former 49ers' quarterback Colin Kaepernick started the anthem kneeling protest movement in 2016, he was merely a conscientious objector who "wasn't making it a big public statement." It was the press that turned it into a big deal, and then it became a "political football" with President Donald Trump commenting on it. However, Kaepernick met the press and did make it a big public statement. He was not going to stand up to show pride in a flag for a country that he thinks oppresses people of color.

Incorrectly assuming employees at private companies have free speech rights, Kellerman said flag protests are a matter of free speech. The players should also call the shots on anthem behavior, rather than the league and the owners:

"If sitting or kneeling for the flag is a political statement, that means it's a form of speech, then standing is also. Then they both are. And if standing is, and your employer is telling you in order to be employed here you must parrot my political speech, that's not American to me. I don't think that flies. By the way, it's not in the rules of the NFL either. It's supposed to be up to the players."

Smith rejected Kellerman's gaffe, pointing out the NFL is a private entity. "If you're going to do something on the field of play, counter to what they deem to be in the best interest of their product, they have a right to make a move and make a decision. So Michael Bennett, we credit him and applaud him for, you know, taking a stance that he took, but he acquiesced to some degree because he certainly isn't being on the field."

Kellerman was inconsistent in other assertions, too. On one hand, he said people can defend Bennett's right to kneel, and the NFL can't make anybody stand. On the other hand, he said if Bennett wants to be on the field during the anthem he must participate in the ceremony. But what did he do last season? He was seen leaving the locker room and disrespectfully walking onto the field during the Star Spangled Banner. On another occasion he sat on the bench during the anthem. In this era of protests, those are the actions of an attention-seeking SJW who thumbs his nose at the veterans who died while defending freedom.

Smith claims the whole kneeling situation is all about Kaepernick and no one cares about others who refuse to honor America before kickoff:

"The story with the national anthem and the kneeling strictly involves Colin Kaepernick. He's the poster child for it. He's the individual that is identified with it most strongly. And anybody else who takes the position that he's taken has basically, for the most part, been ignored. We see them on camera. We recognize they're taking a knee. But nobody's really had much to say about those other individuals."

During the 2018 season, the media was so busy telling NFL teams they should sign Kaepernick that they provided little coverage on ongoing protests by active players. But whether it's one protester or 200, were fans happy with continued disrespect? Obviously not.

Smith appreciates Bennett's protests and says he should be applauded for being upfront and resolute about where he stands. He doesn't think anyone (progressive media who support the protesters) will bother Bennett about staying in the locker room. "I don't think anybody is going to really excoriate him in any way. The ire over the national anthem issue has been aimed in the direction of Colin Kaepernick. Everybody else that's been associated with it has virtually ignored, and that's why I don't think it's a big deal."

I did an internet search on "Kenny Stills kneels during national anthem," and it drew 293,000 results. The Miami Dolphins' player is just one of several NFL players who protested in 2018. That's not exactly ignoring his protest, as Smith asserts.

Smith also said the reason Kaepernick was kneeling for the national anthem was not the real issue. Instead it was, "The fact that he was brave and courageous and cogent enough to articulate his position as to why he was taking a knee for the national anthem, to bring attention to oppression, racial inequality in this country and beyond ... ."