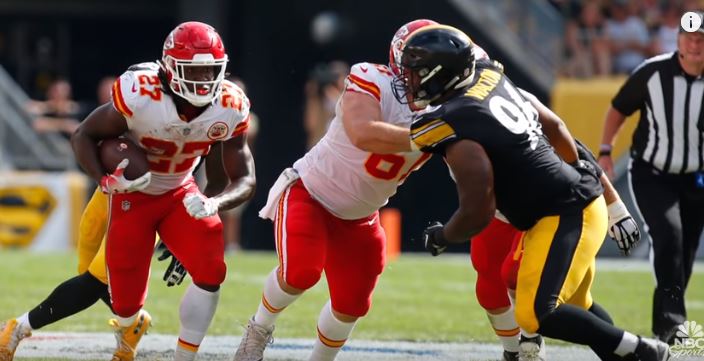 Raising a red herring, Detroit Free Press columnist Shawn Windsor bemoans that if woman-beaters like Kareem Hunt are allowed to play in the NFL, then Colin Kaepernick should be allowed to play, too. The argument isn't if a violent man can play, then why not Kaepernick? The better point that Windsor badly misses is no owner has an obligation to employ any athlete who has crossed a line of incivility.

Windsor raises a point that many other sports media are whining about. Especially after Kansas City released the running back Hunt (at left in photo), who's under investigation for kicking a woman. Cleveland signed the suspended player, but he must rehabilitate himself with the NFL before he will be allowed to play again. The NFL has a pathetic record of dealing with players who've beaten up their wives or other women, most notably with an initial slap on the wrist for former Baltimore Raven Ray Rice after he punched out his wife. That violent outburst ended his career after video of the assault leaked months later.

Kaepernick offended many in 2016 when he kneeled during the playing of the national anthem. A free agent after that season, he has never been offered another contract. The cop-hating, anti-American, Cuba-loving Kaepernick would be a detriment to the reputation of the NFL or any of its teams.

Every owner would also be well within his right to ban any thug who has mistreated women. One wrong doesn't justify additional wrongs, and that's what so many sportscasters and writers don't get.

Windsor is just the latest to do the if-Hunt-then-Kaerpernick whine. He writes that it’s hard to get past the message sent by Cleveland's signing of Hunt. He's mistaken when he views this as "violence against women is forgivable, while kneeling during the national anthem is not."

Windsor concedes that Hunt took full responsibility for his egregious actions, showed true remorse and is undergoing professional treatment in hopes of turning his life around.

Kaepernick has never expressed remorse for alienating military veterans and millions of football fans. He has mocked police officers, sued the NFL for alleged collusion and interfered with the league on which entertainers perform at the Super Bowl. Does this sound like a good employee to anyone with an objective mind? Many in the media believe the NFL owes Kaepernick a job, and when abusive players are signed that mistake should be compounded with another mistake by hiring the former 49ers' QB.

Windsor says he doesn't begrudge anyone getting a second chance. And if the NFL accepts the Browns' attempt to help Hunt resurrect his life and football career, "they would’ve found a way to reach out to the portion of the fan base turned off by Kaepernick. Many of whom, I suspect, will not turn off Browns games next fall." Playing in the NFL is not an entitlement for Kaepernick.

Windsor brought up the ridiculous idea of fan boycotts in 2019, which would be the third year of media liberals complaining about football without Kaepernick. He writes it’s not hard to imagine a general manager giving Kaepernick another chance:

"The NFL is giving Hunt another chance because they know they can sell it. That says plenty, obviously. They had a similar chance to release statements and craft platitudes regarding Kaepernick.

"They didn’t. And haven’t. And likely never will.

"That says even more."

It's no wonder the NFL hasn't crafted platitudes for Kaepernick. That would be "mission impossible."

Let's say that an NFL team signs Kaepernick and he's on the roster for game one this fall. He kneels again, stirs up more player protest, harming his employer's product. It's time for Kaepernick-loving media to finally move on.