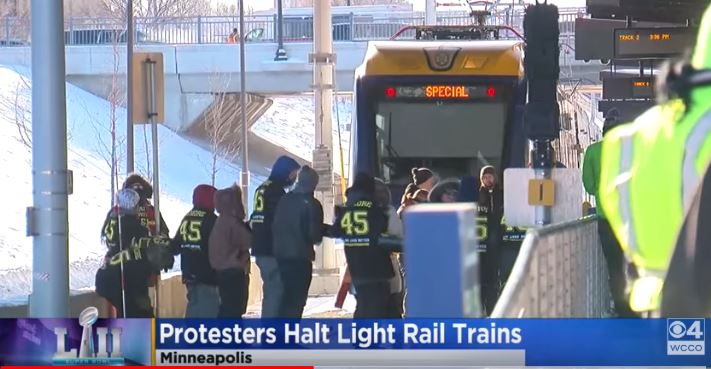 Attempting to squeeze their way in front of the glaring spotlight that is the Super Bowl this weekend will be numerous social justice protesters. The Nation magazine reports that in Atlanta this weekend, the points of protest will surround racial inequalities, voter suppression and income inequality in Georgia.

There will also be calls for boycotting the NFL for, as The Nation's Dave Zirin says, brazen collusion against quarterback and anti-police-brutality campaigner Colin Kaepernick.

The discredited Southern Poverty Law Center, along with the Atlanta NAACP, the Southern Christian Leadership Conference and the Georgia Alliance for Social Justice will protest. So will the Alliance for Black Lives, an organization that “fights the three evils of society: racism, poverty, and militarism.” This is becoming the norm.

At a press conference to raise awareness for protests, NAACP leader Richard Rose said income inequality and recent voter suppression in the Georgia governor's election will be highlighted. Along with “Georgia’s allegiance to the Confederate States of America instead of the United States of America.” The NAACP is also protesting Stone Mountain as the "Mt. Rushmore" of racism. Rose said, "The whole purpose of these monuments is to reinforce and normalize white supremacy. That’s why so many are erected in front of courthouses.”

Zirin picked up the race beat, too, saying, "Since this is Trump’s America, there won’t only be people fighting for racial justice on the day before the Super Bowl. There is also a fascist gathering, a 'pro-white rally' at the aforementioned Stone Mountain."

The voices of dissent will be heard outside the stadium, and the “Kaepernick effect” will also be heard inside the NFL's "velvet rope," Zirin promised. In a series of concerts at Olympic Park, Atlanta recording legend Jermaine Dupri "is changing the usual Super Bowl themes of brand elevation, corporate excess, and Pentagon-approved patriotism."

The halftime show has for months been a major area of protest this year, too. Rihanna, Jay-Z and Cardi B all refused to perform, though Cardi B hypocritically will appear in this Pepsi commercial during the television broadcast:

A year ago, Minneapolis police removed 17 protesters who, for two hours, shut down a train shuttling fans to the game (see photo above). Those removed were cited for unlawful interference with transit. Some 100 protesters, representing the Black Visions Collective blocked traffic and an entrance to the stadium. One protester said, "Everyone, we are taking a knee to support Colin Kaepernick's stand for racial injustice across the country."

In Indianapolis in 2012, unions held an Occupy the Super Bowl protest against Indiana's right to work law. In 2017 security was tight in Houston amid concerns about nationwide protests against President Trump's travel ban.

Zirin, a dependable media voice for the far left, lauded local unions and social justice organizations protesting against the "under-discussed economic and social trauma that the Super Bowl brings." Protesters aiming to disrupt the Super Bowl narrative should be celebrated. A year ago, Zirin wrote of the Minneapolis Super Bowl:

"This isn’t just about leveraging the glare from the big game to spotlight local issues. There are real dangers for working people, immigrants, and people of color that come with hosting the Super Bowl. It’s the danger that arrives with a massive expansion of closed-circuit television surveillance, hyper-militarized policing and the free entrance of ICE into a space that normally is a 'sanctuary city.'”

Zirin said that politics inside and outside "the gated community that is the Super Bowl" will continue. "This reflects the reality of our time, when political ferment is inescapable and where people are getting off the couch and into the streets, determined not to amuse themselves to death."