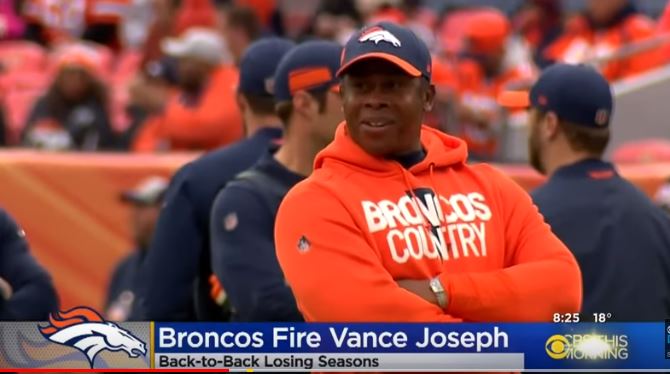 African-American and progressive white writers are in full gripe mode over this season's firing of five black head coaches in the NFL. The combined records of Denver's Vance Joseph (appearing in photo), Arizona's Steve Wilks, Cincinnati's Marvin Lewis, Cleveland's Hue Jackson and the New York Jets' Todd Bowles this season was 21 wins, 50 losses and one tie. Records be darned, though, because it's a clear case of racism, and to The Nation sports agitator Dave Zirin, the support of President Donald Trump by league owners is also part of the story.

African-American writers Jason Reid of The Undefeated, Carron J. Phillips of the New York Daily News and Bleacher Report's Mike Freeman all joined with Zirin, a white writer, to accuse the NFL of blatant racism and in criticizing the Rooney Rule, which requires teams to consider minorities for head coaching positions. Zirin, a hardened Republican hater, writes:

"But why should anyone be surprised that we’ve arrived at this point in 2019. This is a league whose owners gave upward of $8 million to the shady Trump Inauguration Committee. This is a league that is still signing quarterbacks who were terrible in college, let alone the NFL, while denying Colin Kaepernick employment because he dared to speak out for racial justice and against police violence. This is the league that has almost certainly been harassing Carolina Panthers safety Eric Reid with repeated drug tests, for the crime of continuing to demand justice on behalf of his friend Kaepernick."

The NFL only has two black head coaches remaining, and Zirin says the firings reflect a league that is "actively hostile to black progress." He says the Rooney Rule is toothless, but he ignores the fact that everyone hired to coach in the NFL has to win to keep their jobs.

Zirin cited N. Jeremi Duru, author of Advancing the Ball Race, Reformation and the Quest for Equal Coaching Opportunity in the NFL, who wants to build a pipeline to funnel more minorities into head-coaching positions. That, and some initiatives, Duru, suggests, will increase the number of black head coaches.

Zirin adds that it will also require the NFL to admit that racism is the reason for the low number of minority head coaches. "It’s due to the racism that runs deep in the owners’ boxes of the National Football League. Yet this is about more than racism. It’s about respect for labor. It’s about justice. And it’s about the NFL finally joining the 21st century."

The Undefeated's Reid accused numerous NFL teams of going through the motions to interview minority coaching candidates and making a mockery of the Rooney Rule. He demands that teams provide interview transcripts to NFL Commissioner Roger Goodell to prove they treated minority candidates as legitimate applicants.

Phillips says the Rooney Rule is dead and coaches are expendable when they are black. "Black coaches getting fired at an alarming rate, being overlooked for jobs, and called in for interviews that will go nowhere are just the rotten fruits produced by a poisonous NFL tree." That "tree" needs to be chopped down, he says.

The dismal combined record of the fired coaches seems to be an alien concept to these social justice writers, who are more concerned about skin color and diversity than what happens on the field. At the time of Jackson's firing in midseason, Reid complained that diversity should trump performance. That came on top of Jackson having compiled an overall record of 3-36-1 at Cleveland.