The Root Blasts NFL For a Trump-Like Dictatorship, Drug-Testing of Eric Reid 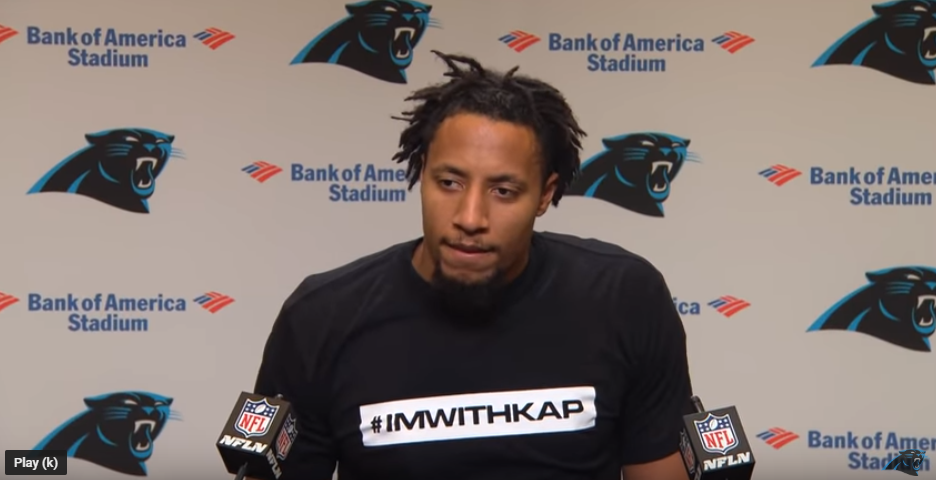 Eric Reid, a safety for the NFL's Carolina Panthers, has been subjected to "random" drug tests seven times in his 11 weeks with the team, and he says it's retaliation for having kneeled for three seasons and for suing the league for alleged collusion. The Root writer Stephen A. Crockett Jr. says the frequent drug tests of the malcontent stem from the NFL's likeness to the Trump Administration. Both are "dictatorships disguised as democracies," he writes.

"The NFL is the Trump administration of American sports leagues," Crockett declares. "Despite being almost 70 percent black, the NFL ownership doesn’t care about black people. They bend policies, hire accused domestic abusers, and make no bones about doing whatever they want with impunity. Sounds a lot like the current administration, doesn’t it?"

Reid is one of Colin Kaepernick’s "closest allies in his fight against the unjust killings of African Americans by police" and was the first player to join him in his national anthem protests in 2016. In the past year, both Kaepernick and Reid have sued the NFL, claiming owners colluded to keep them out of the league. Reid was signed by Carolina during the present season, but Kaepernick hasn't been offered an NFL contract. Reid is either the unluckiest player in the player in the NFL or the league is targeting him for speaking out, Crockett asserts.

Yahoo! Sports, another defender of social justice warrior athletes, reported there is a 1-in-588 chance that Reid could be randomly selected for drug tests as often as he has been.

That set off Crockett for more verbal grenade throwing:

"I’m sure that Reid’s seventh drug test in 11 weeks had nothing to do with the fact that he’s still kneeling during the national anthem or that his game cleats just so happened to celebrate protests throughout America’s history and featured the quote: 'If not us, who? If not now when.'

"To understand why Reid’s 'free black man' posture and protest cleats irritate the NFL, one needs to look no further than the Trump administration, as both are dictatorships disguised as democracies."

This was only a warm-up for Crockett, who fumed:

"The NFL is a mirror of Trumpian thinking that bands together to form an evil orange spray-tanned Voltron of racism and good ole boy thinking. Free-thinking black men don’t survive in this land. Make no mistake about it, Reid is being punished for his outspokenness. He’s being punished for kneeling next to his friend and standing up for what he believes in. He’s being punished with the only weapons that the NFL can form against him, which are the inconvenient drug tests."

Crockett says the NFL and Trump Administration do not like being challenged, and he strayed far from football for examples. He asked readers to remember Trump and the Jim Acosta "karate chop-gate," the president's randomly taking on Amazon's deal with the U.S. Postal Service and suggestion that Saturday Night Live's comedy should be tested in court.

It's the same with the NFL, Crockett charges. It operates with impunity, and until a judge "hands them their ass," they are a sports version of this White House. Black folks will continue to watch football and Trump will build the wall and "continue to criminalize skin color."

Crockett played the slavery card, too:

"During slavery, masters would beat their slaves publicly in front of other slaves as a show of force. It was also a chance for those slaves who were even considering speaking up or running away to witness what would await them should they attempt to leave. Trump publicly lashed Jim Acosta in front of a room full of reporters, and Reid came back to his locker to find a note telling him that he’d been randomly selected for the seventh time in just 11 weeks. This isn’t accidental."

Overlooking the NFL's $89 million gift to its players for social justice activism, Crockett lampooned Commissioner Roger Goodell and the NFL for seeking to silence black protest.