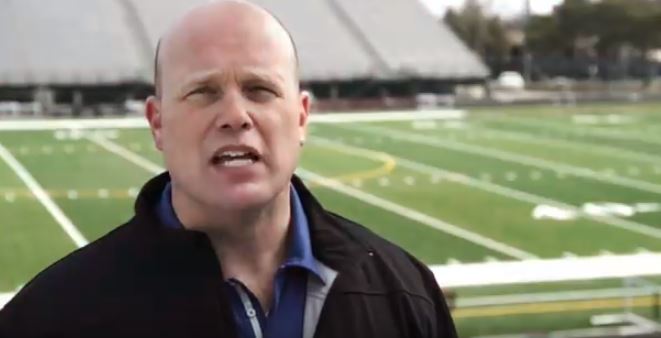 "The information universe is in a state of constant evolution, but the sports background of any controversial figure is almost always  irrelevant." This statement appears at the end of Tim Layden's hypocritical Sports Illustrated criticism of acting attorney general Matthew Whitaker (appearing in photograph) and Supreme Court Justice Brett Kavanaugh. The ironic thing is that Layden specifically focused on the sports background of both men. The appalling thing is that Layden lumps the sports backgrounds of Whitaker and Kavanaugh in with those of despicable criminals — a rapist and a terrorist.

Layden began his hypocritical story by relating how President Donald Trump replaced the fired AG Jeff Sessions with Whitaker on the day after the midterm elections:

"An important news story, to be sure—Whitaker became the nation's chief law enforcement officer—but there was another angle too. As instant Whitaker biographies popped up across the Internet, one detail took on a shine: He had been a tight end on the Iowa football team in the early 1990s and played in the '91 Rose Bowl against Washington. There was also video of one of Whitaker's two career touchdowns, among his 21 receptions in three seasons. He looked liked a classic Hawkeyes tight end, resembling a tackle with an H-back's jersey number (46). His shoulder pads were enormous, as was the style of the day."

After the Whitaker appointment became news, it wasn't unusual for the media to incorporate his football background into the fast-flowing narrative, Layden writes. "And it's of seemingly unambiguous utility. Of all the details swirling around this particular government employee, many of them contentious, calling him a former college football player seemed distinctly safe."

That link about "contentious" details goes to a Vox story explaining that Democrats are suing to try to block the Whitaker appointment because he wasn't confirmed by the Senate and they say that's a violation of the Constitution.

On its face, this may seem harmless, Layden adds. "But it's not always harmless. And we should rethink how sports is used to define identities and shape reputations." How is it not harmless to report on the sports connections of newsmakers?

For one, Stanford swimmer Brock Turner was arrested and charged with three counts of felony assault and attempted rape of an unconscious woman in 2015. For another, Cesar Sayoc was arrested on Oct. 26 in Plantation, Fla., and charged with mailing 16 bombs to critics of President Trump, and he had soccer stickers on his van. Sports Illustrated published a story about Sayoc's soccer past.

Outlets are quick to seize on these connections, not only because Americans are obsessed with sports but also because of our media ecosystem. ..." Layden complained, shamelessly, for tying these atrocities to Whitaker's appointment as acting attorney general. Which is "contentious" because Democrats say it is. He goes on to say, ''The myth of the football player is a potent trope in American culture." Without explaining how this connects Whitaker with violent criminal acts.

Layden wasn't through yet with his character assassinations. Justice Kavanaugh came into his line of fire, too. "It's no surprise that Justice Brett Kavanaugh referenced his sports background nearly 50 times during his Supreme Court confirmation hearings," writes Layden, who raised the subject of Whitaker and Kanaugh sports ties and criticizes others for what he's just done himself:

"The country is actively arguing over Whitaker's fitness to be attorney general of the United States. Football doesn't belong in the discussion, unless you're trying to manipulate that discussion, which is an entirely different issue."

If Layden's intertwining of the sports backgrounds of Whitaker and Kavanaugh with the sports ties of Sayoc and Turner isn't negatively shaping opinions, then what is it? The mention of two Republicans convicted of no crimes in the same story with a rapist and a terrorist ranks as an absolutely shameless character assassination that has no place in journalism.