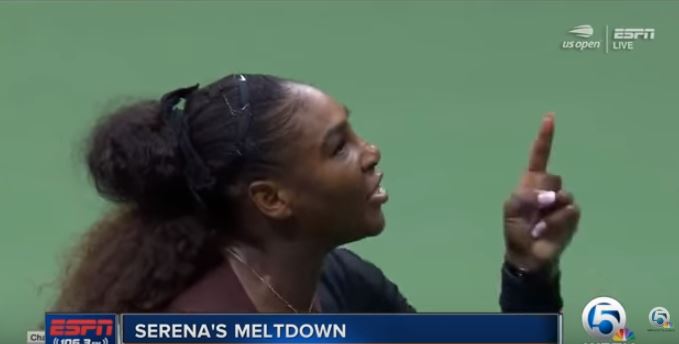 Whining about racism is what the New York Daily News' Carron J. Phillips does for a profession, even if he has to invent it. Today's whine is about how African-Americans Serena Williams (seen berating the umpire at the U.S. Open) and Alabama football quarterback Jalen Hurts always have to be the bigger person, no matter how pained they are by criticism. Phillips brings in two world-class whiners and race-baiters, LeBron James and Jemele Hill, to help him make a case for racism perpetrated on black athletes.

During Williams' loss in Saturday's U.S. Open women's finals tennis match, she wasn't penalized for her McEnroe-like behavior. To Phillips, she was penalized "for simply being a black woman."

Hurts, the Alabama quarterback who lost his starting job in last year's national championship game, has it rough, too.

"Hurts has been dealing with a similar situation for months, given that Alabama coach Nick Saban has boxed him into a corner," Phillips says of the white coach's handling of the quarterback struggling to hang on to his starting position against a Samoan rival. Saban is a villain for wanting Hurts to stay at Alabama instead of transferring to another school, just in case the Samoan starter gets injured.

Williams walked off the court with nearly $2 million in prize money after disgracing herself by calling Umpire Carlos Ramos a "thief." Her media apologists also defended her over the French Open's ban of her catsuit playing attire. Phillips pulls out a quote by Jemele Hill, the former ESPN host, who said in an August episode of ESPN's Highly Questionable TV program:

“The unfortunate part about all of this is that Serena doesn’t even get the space or the room to be angry. Very few prominent black people, and very few black people period, get that space to be angry."

What? With the whole world watching and no one lifting a finger of resistance, Williams had center court at the United States' most prominent tennis venue to unload her tempestuous baggage.

And speaking of James, he made some comments on HBO's The Shop, which Phillips uses in his sob story, too. James had complained about double standards:

“For us as African-Americans, because I believe if the greatest quarterback in the world, he’s a white quarterback, if it's (Tom) Brady, if it's (Aaron) Rodgers, if it's (Peyton) Manning. And we're doing the same sh-t, the same exact sh-t. I'm talking about a phone is out. We're like, 'Yo, get that f---ing phone out of my face. I'm with my family,” he explained. “If we're out with our family and we say that sh-t and somebody posts it, and if Aaron Rodgers or one of those guys say that sh-t and they post it, somebody's going to be like, 'Hey, you guys should respect Aaron Rodgers.'

"From famous athletes to those that work in corporate America, the burden of always having to take the high road is exhausting, unfair, and racist.

"It strips us of our humanity, as we’re robbed of the experience of getting to truly feel our emotions. We’re always on lookout because we have to be cognizant of how we’re perceived.

"So if you’ve ever wondered what true equality would look like, it would be a world in which Serena Williams and Jalen Hurts could vent their frustrations freely and without repercussions, receiving compassion and understanding, instead."